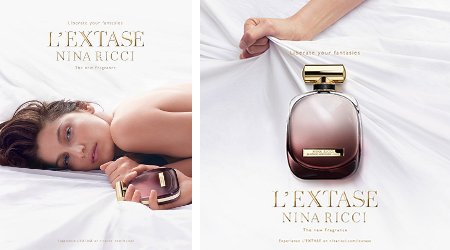 Nina Ricci's perfume distribution in the US is spotty. You can find the old classic L'Air du Temps at Nordstrom or Macy's, and Macy's also has the youth-oriented Nina. That's about it. Bloomingdales, Saks and Neiman Marcus don't have anything (although Neiman Marcus has some lovely items from the fashion line at the moment), nor does Sephora. I never saw Ricci Ricci or Mademoiselle Ricci here at all, although admittedly I did not look all that hard.

I was curious about L’Extase, the latest, which is geared older than Nina but younger than L'Air du Temps. +1: it's a musky floriental from perfumer Francis Kurkdjian. -1: the advertising, with Laetitia Casta, is the usual drearily predictable writhing we've already seen a million times over.

The list of notes (white petals, roses, pink pepper, benzoin, Virginia cedar, musk and amber) leaves out the undisputed star of the early stages, which is an barrage of sweet blackcurrant-ish berries. The berries linger longer than I expected (or maybe a better way to put it is that they lasted longer than I'd like), but once they start to fade, L'Extase's lineage is more obvious: what we have here is Lancôme's La Vie Est Belle via Armani Sì.1 L'Extase is more rose-y (and more floral in general) than Sì, with less patchouli, more woody musk. The pink pepper is quite strong for a time, the powdery dry down has a distinct edge of cotton candy.

Verdict: L'Extase smells both new (it hits all the current trends) and old hat (it smells like so many other fragrances you'd be hard pressed to name them all). It's reasonably wearable but I found its sweetness irritating in our current humid summer weather, and while I might have found it more palatable in early spring, it's not likely it would be a favorite of mine in any weather. It does, as advertised, smell older than Nina, but it's hardly what I'd pick if I wanted to smell sophisticated or elegant, and personally, I did not find it even slightly sexy. If I was wanting a spawn of La Vie Est Belle — not likely, but if — I'd stick with Sì.

1. Which, of course, means it's an nth generation spawn of Thierry Mugler Angel.

2. So far as I know, there are no plans to distribute L'Extase in the US. When distribution plans were detailed in Women's Wear Daily earlier this year, the US was not mentioned. The rest of the world should either have it already, or will have it by the end of the summer.