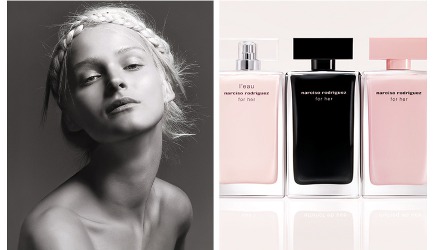 American fashion designer who became famous after designing Carolyn Bessette Kennedy's wedding dress while he was working at Cerruti. His own label debuted in 1997. The fragrance license is jointly held by Narciso Rodriguez and Shiseido subsidiary Beauté Prestige International.

Fragrances were introduced in 2003 with Narciso Rodriguez For Her, a fragrance based on the Egyptian musk that Rodriguez had been wearing (and blending with other scents) for some years. For Her is available in a musk oil and an Eau de Toilette. In 2005, an Eau de Parfum version of For Her with different floral notes was launched.

2007: Narciso Rodriguez For Him

2012: For Her Eau de Toilette Delicate

See all articles on Now Smell This tagged Narciso Rodriguez.