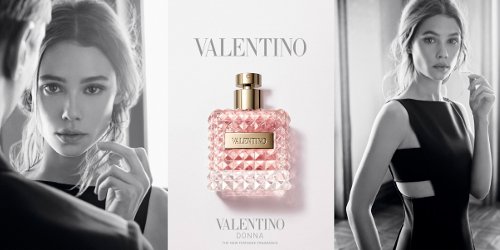 If you adored Lancôme La Vie Est Belle1 or any of its various spawn (Giorgio Armani Sì, Nina Ricci L’Extase, Salvatore Ferragamo Emozione et. al.) and you were hoping for more candied iris powder, do try Valentino's new-ish Donna, which I'd call the latest in the series except that I'm so far behind that Donna has been out for months and there are probably umpteen new fragrances in the same vein that I haven't even smelled yet. Ah well.

Donna is the feminine counterpart to last year's Valentino Uomo, and it maintains that scent's emphasis on sugar, or to put it as Kevin did in his review, loads of sugar, at least in the opening. The top notes are a sweet 'n fruity blend, rather loud, cut by a touch of citrus and saved from toothache — just barely —by mild leather notes peeking through from the base (the notes: bergamot, Bulgarian rose, iris, patchouli, leather and vanilla). The heart is a lipstick rose-iris powder, very pink, very feminine and rather pretty, and considerably quieter than the opening.

On my skin, the leather is essentially top-loaded and settles into a little hum of suede in the dry down, which is otherwise a vanillic powder, rather chalky, still a bit sweet but by now the sillage is minimal enough (it's very nearly a skin scent) that it doesn't overwhelm. The patchouli, as is nearly always the case these days, is entirely tamed and not likely to bother anybody.

Verdict: Gosh, not bad, not bad at all. I have not had good luck with the Valentino perfume line, so I was rather surprised that I didn't hate it. I don't want to own it, and I like both Sì and Emozione better, but I found Donna easy to wear if rather too pretty-in-pink for my personal taste. I would have liked it much better if they'd toned down the candy in the opening, and maybe amplified the leather in the base, but still, not bad at all, and much more to my taste than the more youth-oriented Valentina.

It's polite enough for office wear if you don't spray it just before you arrive. The lasting power is probably closer to what most people would expect from an Eau de Toilette. 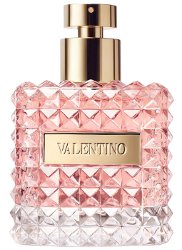 1. Of course, La Vie Est Belle did not start the trend — Jessica did not call La Vie "Angel with Botox and a blow-out" for nothing.