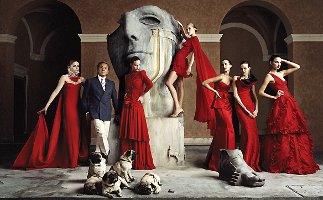 Italian fashion design house established by Valentino Garavani in 1959. Valentino had worked for several Parisian houses, including Jacques Fath, Balenciaga and Guy Laroche, before returning to Rome to launch his own collection. The house was long known for its elegant, very feminine designs, and especially for the evening dresses.

Valentino sold his company in 1998, then retired in early 2008. Alessandra Facchinetti took over as Creative Director but was replaced after two seasons by Maria Grazia Chiuri and Pier Paolo Piccioli. As of early 2012, Chiuri and Piccioli were still in charge of creative direction.

The Valentino fragrance business has been passed around over the years. Most recently, it passed from Unilever to Procter & Gamble in 2005, and then to Puig in 2010. Reportedly, at the time of the deal with Puig, the entire back catalog of fragrances was discontinued. In 2019, the license will go to L'Oreal.

See all articles on Now Smell This tagged Valentino.