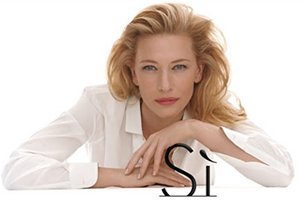 Sì is the latest from Giorgio Armani. It's Armani’s first pillar fragrance for women since 2010's Acqua di Gioia, and it's meant to be a 'sophisticated' chypre1 — note that Sì is fronted by actress Cate Blanchett instead of the the sort of conventionally young and sexy model that they used for Gioia.2 All of which might indicate a somewhat older and more sophisticated target market than the usual for Armani's mainstream output, yes? Which would be fine with me; Armani is not generally my favorite perfume house, and even the more exclusive Armani Privé fragrances don't always live up to their price tags.

So the first sniff of Sì was a bit of a surprise, of the fruity variety. It's a big — and familiar — rush of blackcurrant, almost immediately grounded by some clean, dry patchouli. For a minute, I thought we had another standard issue fruitchouli on our hands. Sì switches gears in short order though, taking on a — likewise familiar — cushion of cotton candy, vanilla and cosmetic powder, underneath a fairly standard clean floral heart in which the freesia is perhaps most dominant (the notes: cassis nectar, chypre accord, musky wood, vanilla, rose de mai, freesia, patchouli and orcanox). The floral notes come more into focus as it dries down, and Sì turns a bit more rose-y, but it's not a heavily floral fragrance in any of its stages.

Verdict: well, I do like it better than Acqua di Gioia, and yes, it is more sophisticated, although that isn't really saying all that much. But Sì is both likable and wearable — I'd choose it over Acqua di Gioia, if forced to wear one or the other — and if it doesn't smell new, well, that's the way it usually goes, right? The fragrance it is getting compared to most often is Lancôme's La Vie Est Belle, and that's fair enough, although I might like Sì a bit better, just because it's a bit quieter, and a bit less sweet. So if you almost liked La Vie Est Belle, give Armani Sì a trial run. The lasting power is quite good.

The quick poll: what mainstream, fairly new fragrance would be a good fit with Cate Blanchett? No cheating with niche or classics! 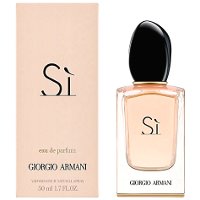 Giorgio Armani Sì was developed by perfumer Christine Nagel. It is available in 30, 50 and 100 ml Eau de Parfum. It is not expected to launch in the US until early 2014.