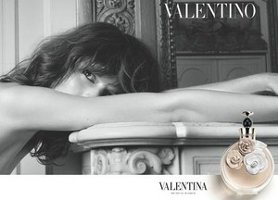 Anyone who regularly samples mainstream fragrances can vouch for the fact that a disconnect between the advertising and the juice is not an uncommon occurrence, and the gulf can be just as wide at the higher reaches of the price (and status) scale as at the lower. It's not at all unusual for an aura of luxury, sensuality and sophistication to be projected onto what smells, essentially, like a strawberry lollipop.

Valentino's new1 Valentina does not sink into strawberry lollipop status, but it's far too well-behaved to live up to its advertising — I almost wished for strawberry lollipop, or some other sign of exuberance. (There, I've already given away the ending, so now you can skip the rest of today's post and go on about your business). Valentina is supposed to be sensual and sexy, and the advertising, featuring model Freja Beha Erichsen, might also lead you to expect something playful but elegant, rebellious but sophisticated, with all the funding such attributes might require, and then plenty more to spare. The bottle's floral decoration in subdued tones of pink and ivory could be the haute couture version of the stick-a-flower-on-it trend that started with Marc Jacobs Daisy.2 As an exercise in aspirational luxury, and the notion that those who can't afford the clothes — or the lifestyle to go with them — might still buy into the dream with a bottle of perfume for less than $100, the packaging and advertising hits its mark perfectly.

Valentina is advertised as a floriental. Michael Edwards calls it a soft floral — and we know Michael Edwards is always right, yes? The opening is strawberry-tinged citrus: it's bright and lively, and it's only very sweet for a minute or two. It dries down quickly into a sheer and clean modern white floral — the sort that doesn't smell much like real flowers, and that you could wear to your office without bothering the person in the next cubicle. It is not entirely without interest; for a time, a bitter green edge keeps the floral notes from being merely pretty, and there is a hint of earthiness (the white truffle note, presumably, although it's mighty subdued) in the pale woody musky dry down. Eventually, it's all smoothed over with a bit of powder.

It's well done enough, in fact, I like Valentina better than a bajillion other department store fragrances of the last few years. But it isn't fabulous, or even memorable, and not for a moment am I tempted to buy. I doubt I will even use up my sample. I hope that if a woman ever finds herself in Freja Beha Erichsen's shoes — that is, in a gated Italian villa, wearing a gorgeous Valentino dress, and about to escape her fancy wedding by sliding down sheets thrown over the balcony ledge so that she can run off to a nightclub where it rains glitter and make out with a young boy in a car — well, I hope that she can find herself a more fitting perfume.3

As an aside, I'll add that I was sorry not to adore Valentina. Regular readers know that I don't know a thing about fashion, but I was fascinated by the movie Valentino: The Last Emperor.4 I am hard pressed to think of another designer of Valentino's stature that doesn't have a single iconic fragrance under their brand name — if you can think of others, do comment. 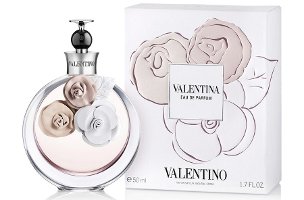 Valentino Valentina was developed by perfumers Alberto Morillas and and Oliver Cresp. The notes feature bergamot, strawberry, jasmine, orange blossom, tuberose, cedar, amber, white truffle and vanilla. It can be found in 30, 50 ($80) and 100 ($108) ml Eau de Parfum and in matching body products.

1. Valentina debuted in Europe last fall, but is not due to launch in the US until next month. It is the first Valentino fragrance under new licensing arrangements with Puig; apparently all of the earlier Valentino fragrances have been discontinued.

2. Marc Jacobs was hardly the first to stick a flower on a bottle, but he does seem to have given the idea new legs, so to speak. And while we're on the subject of Marc Jacobs Daisy, I'll add that its advertising was actually perfectly in line with the juice: young, casual, unpretentious.

3. I should note that I read reviews on several beauty blogs that described Valentina as "smelling expensive". It does not smell particularly expensive to me, but of course as always your mileage may vary. For an interesting commentary on issues of quality and pricing in the fragrance market, see Bois de Jasmin's recent article The Price of Luxury Perfume.

4. About which the New York Times accurately said "Watching the movie is a little like gorging on chocolate and Champagne until that queasy moment arrives when you realize you’ve consumed far too much."