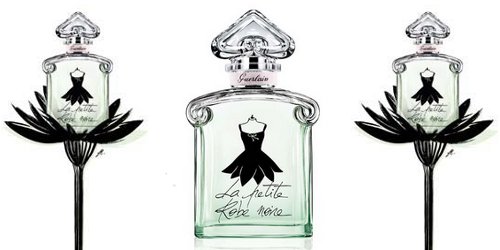 The facts: La Petite Robe Noire Eau Fraîche was developed by perfumer Thierry Wasser. It's described as a fresh green floral with notes of bergamot, mandarin, rose, freesia, jasmine, pistachio, almond, tonka bean, white musk and patchouli. Its juice is tinted green, and its bottle is the classic Guerlain silhouette tarted up with yet another little-black-dress illustration.

I've tried La Petite Robe Noire Eau Fraîche/Ma Robe Pétales (can we just refer to it by the last three words?) a few times this week, and I'm still not sure exactly how I feel about it. In its opening phase, it feels more related to the 2012 La Petite Robe Noire than I expected: there's the cherry-cola accord, muted but still identifiable, and the hint of vanilla. What's new here is a blurry white musk that envelops everything else for a while, until it dissipates and allows the gourmand elements to emerge. As Ma Robe Pétales unfolds, the almond is more noticeable than the very subtle pistachio.

For a perfume with "petals" in the name, this one keeps its flower notes under wraps — there's something in the heart that reminds me of lily of the valley, but otherwise just an underlying hum of soft white florals. And then there's much more white musk than I would have predicted; the dry down is mostly white musk and powdery tonka and almost-bitter almond, which is an odd mix of "clean" and edible notes.

I was writing an e-mail to Robin when I was in a sarcastic mood the other day, and I referred to Ma Robe Pétales as "a stale pistachio macaron wrapped in a dryer sheet." I'm not going to take back that description, but I should add that I actually didn't mind wearing this fragrance. Faint praise, I know! There's something about it that puzzles and appeals to me, and I'll use up my sample vial trying to figure out why. Maybe I just like almondy notes, even when they're clouded over by fruit and musk?

All in all, I'm wondering how Ma Robe Pétales will succeed at the perfume counters. It's really not "fresh" enough for young women who don't want to smell "perfume-y," yet it's probably not dense enough to please anyone whose was curious about the gourmand notes. For a springtime floral with a subtle edible note, I'd recommend Frederic Malle En Passant; if you really crave something nutty, try Parfumerie Generale Praliné de Santal. If what intrigued you specifically was the pistachio note, I know that Laura Mercier offers a fragrance named Crème de Pistache, but I've never tried it. And if you want a real green floral from Guerlain, you might as well cut to the chase and track down some Chamade.