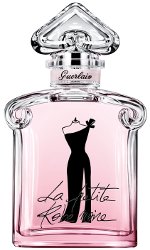 As you may remember, I was not terribly fond of 2012's La Petite Robe Noire. I do prefer this Eau de Parfum Couture version, because I find it softer and less aggressively youthful. Its raspberry note feels creamier and less like an artificially flavored soda drink, the addition of rose in the heart is a pleasant surprise, and the tonka comes across almost like toasted almonds. This nuttiness is complimented by a licorice note and a gourmand-woodsy base. Is there such a thing as candied patchouli? If there is, this is what it smells like. La Petite Robe Noire Eau de Parfum Couture has very good staying power, but since it's not as sweet as its 2012 predecessor, I didn't keep wishing I could wash it off.

As you may guess, the combination of red fruits, tonka, anise and sweet patchouli in La Petite Robe Noire Eau de Parfum Couture still evokes the original Lolita Lempicka fragrance. In fact, the first day that I tested this scent, I was out in public, and I kept thinking that I was smelling Lolita Lempicka on someone nearby. And as much as I can understand Guerlain's need to court younger shoppers, I wish they could do so without releasing an imitative "fruitchouli," even a well-composed one. In my real-life wardrobe, I can never own enough black dresses. In my perfume collection, on the other hand, I tend to avoid fragrances that feel too derivative of things I already own.

1. The 2011 version, though, is reportedly coming back as 'Mademoiselle Guerlain'.