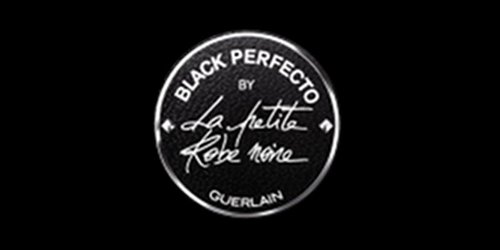 Guerlain fans, rejoice! This smells like a resurrection of Delphine Jelk’s greatly missed original version of La Petite Robe Noire from 2009, which was evidently more charismatic than the reworked 2012 version that followed: a gorgeously rich "Musquinade" blend of raspberry, amarena cherries, bitter almond, Bulgarian rose absolute, licorice, and burnt sugar, well worthy of the Guerlain name. Back then, Guerlain's now former artistic director, Sylvaine Delacourte, explained that La Petite Robe Noire was inspired by the flavour and chewy texture of a raspberry macaron, and Black Perfecto makes us remember why....

Monsieur Guerlain thinks Black Perfecto is the best Petite Robe Noire outside of the Extrait version, which of course I've never smelled to begin with. Guerlain, meanwhile, explains that Black Perfecto is a floral "celebrating every side of the rose". Additional notes include almond, leather, black tea, patchouli, tonka bean and musk.

What I can tell you first of all is that Black Perfecto wears more like a floriental than a floral; yes, there is rose, but it is not assertive, and you are far more likely to notice other things, from the dark cherry cough syrup in the opening, nicely undercut with bitter almond, to the smoky tea nestled on a very clean patchouli in the base. The top notes are sweet, but not overly so unless you apply lavishly, and after that, it's far drier than I would have expected. It's also darker — you'd expect darker, of course, from the reference to the black perfecto jacket, but it's always a surprise when a brand actually delivers on the promise. In this case, the "darker" is offset by the relative sheerness. There is leather and there is licorice, yes, but after the top notes calm, Black Perfecto stays in an airy register (what Monsieur Guerlain called "gorgeously rich" is just barely "rich" on my skin, and that for no more than about 10 minutes). After that, you could probably get away with it for office wear. The far dry down is a slightly creamy vanilla-tonka-musk, with just enough cherry and rose remaining to give it a vague lipstick vibe, although I did not notice that until I took it outside into the heat and humidity. In air conditioning, it just seemed to fade away, rather sooner than I expected, to a wan woody musk.

Verdict: It's quite nice, and indeed, it's the first new mainstream fragrance from Guerlain that I actually enjoyed wearing in a good long while — I would take it over Mon Guerlain in a heartbeat. Back in 2012, Jessica wondered why not just wear Lolita Lempicka and be done with it, but there is something attractive about a sheerer, step-farther-removed-from-Angel version. All the same, I don't love it, and I don't need any. Or do I? Get a load of that bottle, will you? It is indeed Black Perfecto, and if I ever ran across the 30 ml at discount, I'm pretty sure resistance would be futile. 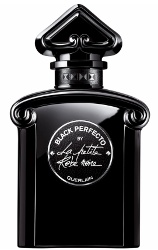 Guerlain La Petite Robe Noire Black Perfecto is available in 30, 50 or 100 ml Eau de Parfum. I don't think it's in the US yet, assuming it's coming here at all (do comment if you know), but it appears to be available nearly everywhere else on earth.