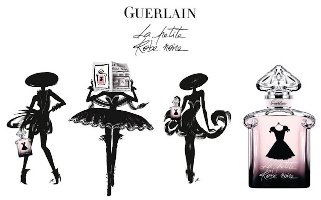 I was puzzled by the La Petite Robe Noire concept when the first version was launched, and my confusion has only increased while I've been trying out this 2012 variation. First of all, what does the "little black dress" motif have to do with Guerlain, one of the few major fragrance brands that has no fashion connection? (It would make perfect sense for a Chanel perfume, of course.) Did anyone really think that the cartoonish silhouette of a dress fits well on the classic square Guerlain bottle with its inverted-heart cap? Why was the romantic-revenge anthem "These Boots Are Made For Walkin'" chosen for the commercial? And is the fragrance itself some kind of cynical joke?

If you want the long-story-short, here it is: to me, La Petite Robe Noire 2012 is a washed-out copy of Lolita Lempicka topped with a shot of Cherry Coke. There's a fizzy-sugar red-fruit top note. The second phase of the composition is a smoky-sweet tea with bergamot, and I did enjoy this element of the composition, but it didn't last long. The extended heart and base of the fragrance is a slightly muffled blend of iris, licorice and tonka. Hours and hours later, some traces of the cherry notes re-emerged in the final vanilla-anise dry-down. If you like Lolita Lempicka (now called Lolita Lempicka Le Premier Parfum), you'll like this fragrance well enough, but why bother, when you can just buy another bottle of the cheerier, better-rounded Lolita? Even as a derivative scent, La Petite Robe Noire ends up falling flat.

I'm not necessarily opposed to "younger" releases from venerable fragrance houses, if they're done well and they convey some aspect of the "brand DNA," as marketing people say. Délire de Roses made sense to me because Caron has released so many rose-inspired fragrances over the past decades; Houbigant's Oranger en Fleurs applies contemporary dryness to a traditional white floral theme. I liked Shalimar Light well enough, and I could see how a young woman who wore it might eventually investigate the original Shalimar. However, I can't image a twenty-year-old wearer of La Petite Robe Noire taking much of an interest in Mitsouko or Chamade (one of my favorites!) or other Guerlain classics.

Or am I completely missing the point? What do you think?