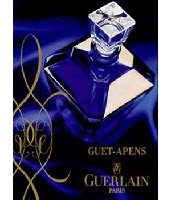 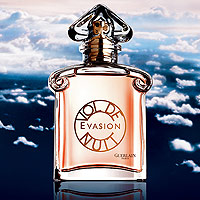 The archetypal image of Valentine’s Day is a heart-shaped box of chocolates. Done right, the box is wrapped in lightly padded vermillion satin, and the chocolates are rich and silky smooth — no grainy cherry filling here. Of course, next to the box is a lush bouquet of fragrant flowers. It’s romantic, timeless, and sure to melt the coldest heart. To me, its perfume equivalent could only be Guerlain Attrape-Cœur.

In 1999, Guerlain released Guet-Apens Eau de Parfum as a limited edition and named Mathilde Laurent as its nose. The fragrance was reissued in 2005 as Attrape-Cœur, this time credited to Jean-Paul Guerlain. (I’ve also seen Maurice Roucel’s name tossed in as a contributor to Attrape-Cœur.) In 2007, Guerlain released an Eau de Toilette formulation in duty free shops and named it, oddly, Vol de Nuit Evasion. (To make it even stranger, Vol de Nuit Evasion was packaged in a L’Heure Bleue/Mitsouko bottle, but labeled with the classic Vol de Nuit parfum logo.)

In French, guet-apens means “ambush.” I think Attrape-Cœur (“heart catcher”) is a more fitting name for the fragrance. The difference is subtle, but a heart catcher sounds like something seductive, while an ambush is a dirty trick. Attrape-Cœur is a seductress.

I couldn’t find any official notes for Attrape-Cœur beyond “rose, violet, vanilla, woods,” but to me the fragrance is a symphonic floral with amber, vanilla, sandalwood, oakmoss, touches of peach and raspberry, and a pinch of civet. I smell candied violets, iris, rose, and enough jasmine to make its center vibrate. The amber, vanilla, moss, and fruit hint at Rochas Femme and Yves Saint Laurent Yvresse, but Attrape-Cœur is lighter, more floral, and not quite as ripe. A pinch of powder brings to mind silk-skirted dressing room tables.

Attrape-Cœur sounds like it should be a whopping grand perfume, but for all its bosomy, ballgowned, François Boucher-minded construction, it wears as light as chiffon. Vol de Nuit Evasion is even more sheer. I’ve been spraying it on shamelessly all week, and the compliments I’ve received have all come after people had been around me for a while, then seemed to awaken to my perfume. It grew on me more, too. I started the week liking Attrape-Cœur a lot. I ended the week loving it.

On first spray, Vol de Nuit Evasion is almost identical to Attrape-Cœur. Within half an hour, though, Attrape-Cœur easily overpowers its Eau de Toilette sibling. Attrape-Cœur is more fleshy and rich, and its jasmine and iris are more pronounced.

Now for the heartbreaker: Guerlain Attrape-Cœur was discontinued in 2010, and I haven’t heard reports of Guerlain Vol de Nuit Evasion sightings in years. The world needs romance more now than ever. Come on, Guerlain, give us back our Attrape-Cœur.