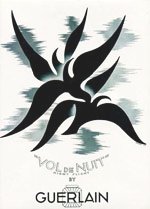 Whenever I have a bout of insomnia on terra firma, I do not count sheep or backwards from 1000, nor do I imagine myself on a deserted beach in a comfy hammock; I imagine myself on an airplane, high in the sky, at night. Put me in a window seat with my neck-rest, pillow, eye mask, blanket and earplugs and you will behold a man who can sleep from Seattle to Bangkok. I do love “flying,” especially at night; on an airplane, the engine’s hum and vibration, the isolation, and the suspension of physical activity all induce drowsiness and serenity.

Guerlain’s Vol de Nuit (Night Flight) was (supposedly) inspired by the 1931 novel of the same name by aviator Antoine de Saint-Exupéry. I read Vol de Nuit and assume Guerlain loved its title and figured out a way to incorporate the story into Vol de Nuit’s advertising. Vol de Nuit, le parfum, in no way conjures up the sense of danger and high altitude excitement the novel depicts.

Vol de Nuit’s plot is simple, its resolution speedy. On an evening in Buenos Aires, the manager of southern South American airmail routes, Rivière, anxiously waits for the arrival of the airmail plane from Patagonia, but the airplane encounters a fierce storm, is thrown off course, runs out of fuel, and its pilot, Fabien, and a wireless operator onboard, die. Fabien’s wife, Simone, makes brief appearances in the novel — her fate is always to wait for her husband and hope he is safe.

Using the elements of the novel and the characters I’ve mentioned, what should a perfume called Vol de Nuit smell like? It should be redolent of ozone, rain, over-heated metal, fuel, sweat, coffee, leather, flowers, ink and paper, and the ocean. (COMME des GARÇONS — get to work!)

I became interested in Vol de Nuit when I began researching old Guerlain scents, trying to find vintage perfumes that a man could wear today; I whittled down my Guerlain choices to three classics: Mitsouko, L’Heure Bleue and Vol de Nuit.

Created by Jacques Guerlain and released in 1933, Vol de Nuit contains bergamot, galbanum, petitgrain, jasmine, daffodil, spices, woods, iris, vanilla, amber and forest notes. Vol de Nuit in Parfum strength is a dense scent. I smell galbanum and jasmine upon application but these notes fade quickly. Vol de Nuit’s mid-notes are well blended and I detect only hints of (bitter) iris and daffodil. The amber and vanilla in Vol de Nuit’s dry down are longer lasting than all other notes and they dominate the perfume. Vol de Nuit has a cream-powder, silken character and though it does not smell “modern” by any means, its aldehyde content, on my skin, does not make it veer into matronly territory either. I could not imagine wearing Vol de Nuit in spring or summer because I felt trapped/encased by its too-sweet, tenacious scent. (Some people feel trapped inside airplanes — this is a Vol de Nuit “connection” some may understand.)

Vol de Nuit’s bottle is one of my all-time favorites: the design in relief on the perfume bottle’s face shows a whirring airplane propeller and the words VOL DE NUIT appear on a metal circle that resembles a propeller belt.

I have finished my preliminary Guerlain education. Of the three vintage Guerlain fragrances I thought would suit men (me), Mitsouko was the winner. Mitsouko is addictive — vibrant, original and delicious. L’Heure Bleue has a striking personality but its chilly, musty, medicated scent is an acquired taste. Vol de Nuit, compared to Mitsouko and L’Heure Bleue, is bland — it bores me. I now own a bottle of Mitsouko. I will (perhaps) touch base with L’Heure Bleue a few times a year. Vol de Nuit? Adieu!

(Let the reprimands begin — there are no fans like Guerlain fans and I know Vol de Nuit has staunch admirers, female and male.)

Perfume and Emotion
1933: The Year in Perfume