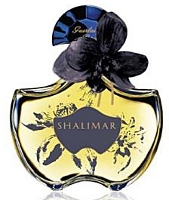 Guerlain has launched Shalimar Addict, which sounds like a new flanker for the line's iconic Shalimar perfume for women (originally launched in 1925) but might turn out to be just a collector bottle.

Night-blooming flowers, vanilla and musk blend exquisitely in this romantic and sensual scent to create instant and lasting intrigue.

I will post more detailed information about the notes if I can find anything.

Guerlain Shalimar Addict is a limited edition, and is available now at Dillards; $123 for 75 ml Eau de Parfum.

Update: according to Macy's, where the same bottle is now available for sale (they have it for $117), this is a limited edition collector bottle and not a new fragrance. They are calling it simply "Shalimar Eau de Parfum Limited Edition".

Another update: this is, as many suspected, the new Fleur de Shalimar flanker, and Dillard's apparently had the name wrong. It can be found in Shalimar Eau de Parfum (shown above) or Eau de Shalimar Eau de Toilette (same bottle in a lighter color), and they are simply collector bottles — not new fragrances.