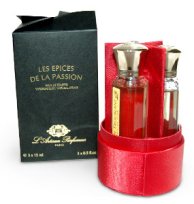 L'Artisan introduced Les Epices de la Passion, a coffret with three spiced "love potions", in 2002. I've been having an on-again, off-again love affair with Safran Troublant since I first smelled it (more about that tomorrow), but the other two fragrances, Piment Brûlant and Poivre Piquant, I pretty much ignored after trying them briefly on test strips some time ago. Both scents were created by perfumer Bertrand Duchaufour, and since he is seriously in the running for my own little parallel-universe award for Perfumer of the Year (and I'm sure he is quite excited about it too), I thought it would be worth giving them more serious attention.

Piment Brûlant was inspired by the Aztec drink xocolatl, a bitter mixture of chocolate and cornmeal spiked with chili peppers, cinnamon, achiote and other spices; the Aztec emperor Montezuma reputedly drank up to 50 cups every day from a golden goblet. The L'Artisan scent includes notes of raspberry, red pepper, vanilla, cloves, poppy, musk and amber, and it may be the sweet berry notes in the opening that put me off when trying this one on a scent strip. On skin, it is more interesting; the pepper slowly intensifies and breaks through the sweetness of the raspberry, and early on, little touches of unsweetened cocoa and clove meld nicely with the heat from the pepper.

As it dries down, the chocolate turns a bit creamy (not overly so — this would never satisfy anyone's gourmand-dessert cravings) and it takes on a dusty finish that isn't quite powder. If it sounds warm and rich, well, it isn't; it is actually rather sheer and summery, much more so than it sounds, and somehow it doesn't quite live up to the exoticism of its inspiration. An extreme version, with more heat and depth, would come closer to the love potion it aspires to be. Still, Piment Brûlant is enjoyable to wear, and I hate to quibble when it is ever so much better than 95% of what you'll find on your average department store counter.

Poivre Piquant was apparently inspired by a recipe in the Kama Sutra, and has notes of white pepper, licorice, milk and honey. The combination is unusual; it is extremely peppery in the opening (almost sneeze-worthy), and considerably more complex and spicy than the simple list of notes would suggest. The licorice never rises above a whisper, but the milk and honey add a gentle creaminess that tempers the pepper in the early dry down, and it smells like food without evoking any particular dish I can think of. As it continues to evolve, hints of floral notes and woodsmoke join in the mix, and the gourmand aspects fade away.

Like Piment Brûlant, it is a softer, cooler fragrance than you might imagine, although I wouldn't quite call it summery. In some ways, it is the most interesting of the three Les Epices fragrances, but it also strikes me as possibly the least wearable, and if I had to guess which of the Les Epices sold the least, this would be my pick. I would love to have this scent in a candle, though.

Piment Brûlant and Poivre Piquant are both Eaux de Toilette, and while they aren't quite fleeting, they aren't going to win any awards for staying power either. You can still find the original Les Epices coffret (three 15 ml bottles for $75, in an adorable little red case), but the fragrances are now also available individually in the standard L'Artisan 50 and 100 ml bottles. For buying information, see the listing for L'Artisan under Perfume Houses.