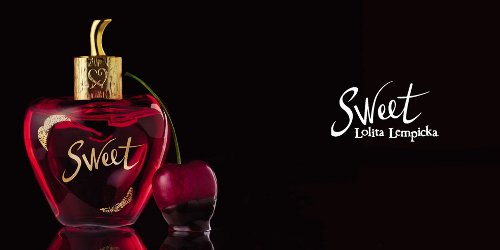 Based on the name, the description, and the video with perfumer Anne Flipo, I imagined Lolita Lempicka's Sweet would be a candy-bomb, something along the lines of Viktor & Rolf Bonbon, or Prada Candy, or even the original Lolita Lempicka fragrance. I was only partly right. Sweet, the brand's new perfume for women "who live life deliciously" is candied, but it's also sheer, especially once the top notes calm. If you think of it as Infusion de Sweet, you'll be closer to the mark.

Wisely, the description references a cherry-cocoa lipgloss accord as opposed to actual cherries and cocoa (although yes, they are in the visuals, as shown above). That's exactly what it smells like early on, in fact, I didn't think of fruit or chocolate, I thought of the many sugary soda-inspired lip products of my youth (Dr Pepper Lip Smackers, anyone?). This smells like a Lip Smacker crossed with those chocolate covered cherries you find at the local drugstore, the ones that have a distinctive flavor all their own, not really chocolate and not really cherry but something new, not found in nature.1

The heart is light florals — there is a brief whiff of the promised angelica — but once you've gotten there, it's nearly game over. The dry down is a pale woody musk with vaguely fruity undertones and a velvety / almost-powdery finish, warm-ish but not quite as warm as you'd expect for a fall launch. The musk hangs around for a good long time, but it's rather thin. I predict many people are going to complain about Sweet's lasting power.

Verdict: If you were worried Sweet would be too gourmand for you, it might be a pleasant surprise; if you were hoping for a decent dessert-fest sort of perfume, I'm not sure it will live up to your requirements. It only smells like a gourmand for about 15 or 20 minutes. After that, it's pleasant, but probably not compelling enough to attract a ton of perfumista attention. I assume Sweet is meant to appeal to younger consumers (it's being fronted by Elle Fanning, who is now 16),2 but I can't say that I found it too young so much as I found it too little. I will wait for the Sweet Intense flanker...

1. I never tried the Dr. Pepper Cherry soda they brought out a few years ago, but I now imagine it to taste like the top notes of Sweet.

2. You might remember that she also did the 2012 commercial for Le Premier Parfum.