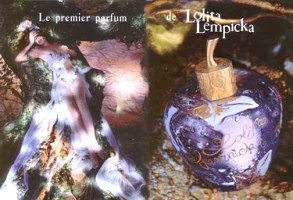 Designer Lolita Lempicka's eponymous perfume, launched in 1997, was already being compared to its obvious forebear, Thierry Mugler Angel, before it even hit the stores, although Parfums Lolita Lempicka insisted that their scent was much more floral. Still, of all the many spawn of Angel, as I like to think of them, Lolita Lempicka might be the most successful, both commercially (it was a top seller) and artistically.

And it is more floral. Perfumer Annick Menardo developed Lolita Lempicka, and she toned down some of Angel's darker, more jarring elements and replaced them with a sweeter, "prettier", less challenging blend of violet, iris and licorice (the notes: ivy leaves, licorice flower, anise seed, amarena cherry, violets, iris, vanilla, praline, tonka bean, vetiver and musk). The top notes are crisp and sharp and fruity; after that, it is a deep, warm fragrance, with a peppery-earthy base made edible by hints of chocolate and vanilla. There are vague hints of smoke in the far dry down hiding underneath the powdery finish.

I used to detest Angel, and to think that Lolita Lempicka, while an improvement, was too sweet to wear. I've pretty much come to terms with Angel, but it took me a good long time. I first "met" Angel when I received a spray sample as a "swap extra" some years ago. This was very early on in my perfumista career, and the smell emanating from the vial, unsprayed, was so pungent that I first "quarantined" it in a zip lock bag, and when that didn't work, I threw it out unsniffed. Now I almost like it, although I do sometimes wish that its devotees would wear it a bit less lavishly.

As to Lolita Lempicka, well, it is probably still too sweet for me, but given all the sweet fragrances that have followed, it doesn't seem quite so outrageously candied to me now. It is a more overtly feminine scent than Angel, and something about the combination of smoky earth + powder gives it what I think of as a coy, "good girl / bad girl" aura. Wearing it next to Angel several days this past week, I found I liked both scents better than I used to, but I finally decided that I preferred the more straightforward Angel.

Lolita Lempicka is available in 30, 50 and 100 ml Eau de Parfum, in 7 ml Concentré de Parfum, in 30 and 75 ml Eau de Toilette, and in matching body products. The smaller bottles can be found quite cheaply (less than $30) at the online fragrance discounters.

Note: I am wearing the Lolita Lempicka in Eau de Parfum and have not tried the Eau de Toilette; if anyone can comment knowledgeably about the difference between the two, please speak up!

5 perfumes: At the Discounters
100 Fragrances Every Perfumista Should Try