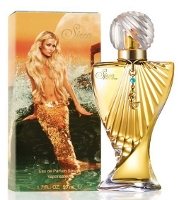 Time flies. Paris Hilton got into the fragrance game way back in 2004; by now, she's something of an old hand. Her latest fragrance for women, Siren, launched earlier this summer. Siren is Hilton's sixth fragrance for women and her ninth overall (there were three scents for men early on, but she seems to have given up on the men's fragrance market as of late).

To recap: I thought the original eponymous Paris Hilton fragrance was just fine — not the stuff of genius, but adequate. Just Me was a bit less than fine, and Heiress was comically less than fine, so much so that I have a kind of a soft spot for it. Can Can was less than fine without anything funny about it to liven things up, and Fairy Dust was about the same. So there you are. I guess you could say that I'm not a huge fan, and in general, despite the stamp of official industry approval, I think the line is not as well done as some other celebrity efforts — Britney Spears, J Lo and Mariah Carey, among others, all do a better job.

Siren is fine, maybe even marginally more than fine. I suppose I should have dragged out Paris Hilton by Paris Hilton and decided which I liked better, but I didn't. Siren's opening is sweet and fruity, with loud but mostly indistinct florals joining in fairly soon after it hits skin. There's something screechy about it very early on, but the creamy "coconut orchid" smooths that out (other notes: mandarin, apricot nectar, frangipani, honeysuckle, water lily, vanilla, sandalwood and creamy musk), and lends a short-lived tropical / beachy sort of slant.

As Siren dries down, the florals quiet and so does the tropical stuff, and we're left with warm candy: vanilla and caramel over some woody musk. For a time, it smells rather like a flatter, cheaper version of Juicy Couture's Viva La Juicy*, then it mostly fizzles out altogether. If you like Siren and you're not on a tight budget, you might do yourself a favor and give the Viva La Juicy a try: it isn't as screechy in the opening and it isn't as flat in the close.

Paris Hilton Siren was developed by perfumer Honorine Blanc. It is available in 50 ($45) and 100 ($55) ml Eau de Parfum and in matching body products.

* Thanks to readers APassionateJourney and jonr951 for pointing that out, because otherwise I'm sure I would have said my usual "It smells just like something else that I can't quite put my finger on..."