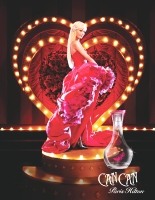 Can Can Paris Hilton is the fourth entry for women from Paris Hilton, who reportedly made the Guinness World Records this year as the world's most overrated celebrity. Despite that and all else (e.g., her recent jail stint and other controversies) her fragrances have apparently continued to sell like gangbusters, bringing in some $75 million a year.1

Can Can is supposed to be an "elegant but fun" fragrance, inspired by the Can-Can dancers of the Moulin Rouge cabaret. It was developed by perfumer Jean-Claude Delville. Like Paris's earlier efforts, it has lots of fruits & flowers, but Can Can is meant to take cues from sexier oriental fragrances (the notes: clementine flower, cassis, nectarine, wild orchid, orange blossom, musk, amber and woods). You won't notice from the opening, which is massively sweet fruits over vanilla cake, and invites comparison to Britney Spears Fantasy. Once it settles though, it is warmer and less fruity (and considerably less sweet), and while it never gets dark or sultry, I guess you could say that it flirts with the oriental category. After an hour or so, it smells like a fairly basic woody musk with a bit of pale amber. 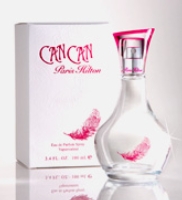 I first tried Can Can on a test strip in the mall, and found the initial blast pretty horrifying. On skin it isn't so threatening, in fact, I found the dry down rather bland. I find the packaging equally bland, especially in comparison to the print ad. I should think they could have come up with a much more engaging bottle on the Can Can/Moulin Rouge theme.

This is it, hopefully: the last celebrity fragrance review of 2007. I thought I'd try to rank what I reviewed this year in order of my preferences, but found that considerably harder going than I'd anticipated. It goes something like this:

Please add your vote: what was the best celebrity fragrance of 2007?

Paris Hilton Can Can is available in 50 and 100 ml Eau de Parfum and in matching Body Lotion and Shower Gel.