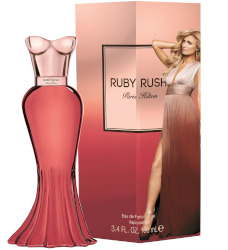 Paris Hilton has launched Ruby Rush, a new fragrance for women. Ruby Rush is the latest in the series that began with 2016's Gold Rush.

Intoducing a rich new addition to the rush collection. With a sleek silhouette and bold attitude. A symbol of lust and power which draws attention for all to see and admire.