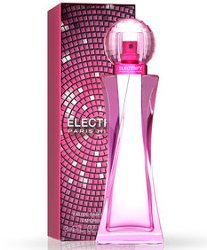 A milestone in the fragrance industry, ELECTRIFY was created to represent Hilton’s true passion for music, dancing and living in the moment. ELECTRIFY captures the euphoria you feel as you dance the night away and lose yourself in the neon lights. It is made for the woman who isn’t afraid to show her confidence, sensuality, and captivating personality.

“What I love most about being a DJ is the burst of energy I get on stage and bringing happiness to a crowd of people,” says Hilton. “I wanted to capture that feeling in a scent and celebrate the confident woman who is the life of the party.”

This magnetic floriental woody manages to be both flirtatious and alluring with its intoxicating blend of Scarlett Apple, Spring Peony and fresh ozonic notes balanced with subtle Turkish Rose, adding a spark of vitality to the hypnotizing aroma of ELECTRIFY.