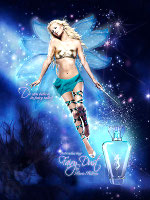 Everybody hates Paris, but she is on the front page.

That's Neil Katz of Parlux speaking.1 Parlux holds the Paris Hilton fragrance license, and Katz has good reason to be optimistic about her selling power: the Paris Hilton fragrances have reportedly made some $90 million. So far. As of early October, Fairy Dust had already added another $1.5 million to the kitty, and it's expected to net $20 million before it's all over and done with.2

I've puzzled over the fascination with Paris Hilton. I used to chalk it up to a kind of schadenfreude — that is, that people enjoyed watching a young woman who presumably had everything screw up royally. But schadenfreude wouldn't sell perfume, would it? No, the perfume presumably has to sell on some sort of aspirational level. Either young women wish they could be Paris Hilton, or they assume that someone with her lifestyle must have excellent taste in perfume plus the resources to produce something fabulous.

Paris Hilton may well have excellent taste in perfume, who knows? All I can say is that no such refinement is reflected in her fragrance line, and I'll go out on a limb here and guess that whatever resources Parlux + Paris Hilton have invested in terms of time, money and creativity have been heavily slanted towards the promotional rather than the developmental end of the business. Of the four scents for women Hilton released before Fairy Dust (Paris Hilton, Just Me, Heiress and Can Can), about the most you can say is that they're adequate and mostly wearable. My favorite so far is Heiress, which while arguably the worst of the lot is at least funny: it's named for the fact that she already has plenty of money, thank you, and it smells like bubblegum. In one of my favorite lines from Perfumes: The Guide, Tania Sanchez calls it a "hilariously vile 50/50 mix of cheap shampoo and canned peaches". Hey, at least it's hilarious! Hilarious is hard to find on the perfume counters these days.

Fairy Dust is neither the best nor the worst of the line. The start is fruity and sweet, and presumably based on Hilton's Rich Prosecco3 wine in a can (the notes for Fairy Dust: sparkling prosecco accord, pink peony, orange blossom, spring gardenia, water lily, peach nectar, sueded patchouli, cashmere musk and vanilla cream). Yep, it does smell sort of like cheap wine if close your eyes and dream. The heart is vague florals with fruity undertones. It doesn't really smell like anything in particular to me other than "celebrity fruity floral blend", but if forced, I'd say perhaps the "gardenia" stands out the most. Later, it smells like "celebrity woody musky base" with a touch of "that clean dark stuff that passes for patchouli these days".

It isn't overwhelmingly heavy or sweet, but it's awfully plodding and flat for something that supposedly makes Hilton "feel as whimsical as a dazzling fairy". I wasn't expecting it to be the stuff of genius, obviously, but I was hoping for a least a little hilarity if nothing else, and sadly, it just isn't there. I didn't even crack a smile once.

The "you can do better" challenge: the smallest bottle of Fairy Dust runs $45. Let's say you know someone in the presumed target market for Fairy Dust (I'm guessing a young lady between 12 and 16? maybe a bit older?) and she wants something trendy and young. What would you suggest for $45 or less?

Paris Hilton Fairy Dust was developed by perfumer Cecile Krakower, and is available in 50 and 100 ml Eau de Parfum and in matching body products.

3. found via NST reader thrpschr, who commented on Hilton's wine brand when I posted an announcement about Fairy Dust. Who knew? Apparently there is nothing Paris Hilton can't sell.