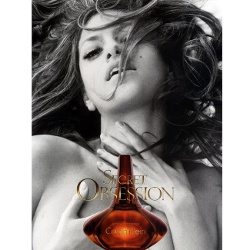 1985's Obsession, from Calvin Klein, was meant to capture the "essence of the 1980's obsession with carnal and material gratification"; Secret Obsession, the brand's latest feminine fragrance, hopes to update that notion for modern times, to "become the meaning of what is sexy today — more personal, sophisticated and intoxicating".* If Secret Obsession fails in that mission it won't be the fault of Eva Mendes, who gamely writhes and moans in (presumably) perfumed ecstasy, and shows just enough nipple to get the advertising spot banned from television, thus ensuring that a bajillion people will watch it on YouTube at no expense whatsoever to Coty.

Like the original Obsession, Secret Obsession is a floriental, but the two scents are not meant to be related in any way other than the name, and in the event, they don't share anything much other than an amber-y base and an overtly sensuous character. Secret Obsession has a sweet, fruity opening that smells entirely of today; still, don't go looking for the sparkling and sheer pinkish berries that decorate so many of the fruity florals of the past five years. These fruits are spicy and overripe. It's not quite Rochas Femme or Frederic Malle Le Parfum de Thérèse, mind you, but it smells more grown-up than I expected. 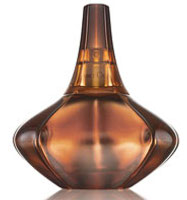 The dry down is a sweet floral (the notes: exotic plum, mace, rose de damas, jasmine, orange flower, tuberose, cashmere woods, burnt amber, vanilla and sandalwood). The rose is center-stage very briefly in the early dry down, after that, it's more of a hothouse, tuberose-ish floral, but it lacks the richness and depth of Obsession's floral heart — it's a bit loud, but has a more modern, stylised feel. While I don't find it unpleasant, I've seen more than one remark comparing it to hairspray.

What hairspray there is largely disappears within an hour; then Secret Obsession is a (relatively) quiet amber-y musky woods, medium-dark, spiced and honeyed but not overly sweet (although the fruit notes, which get buried under the flowers for a time, seem to reappear in the final stages). It's sultry without the bitter edges that render Obsession an unlikely sell in today's youth-oriented market. It isn't a shy scent, but it isn't quite so overwhelming as Obsession, and it's considerably more subtle (and arguably, sexier) than Calvin Klein's last stab at this market, Euphoria.

Secret Obsession is nicely done, and it's always agreeable to smell something that's supposed to be sexy and is — so many "sexy" fragrances turn out to smell like candy (see Jessica Simpson Fancy) or laundry detergent musk (see Tommy Hilfiger Dreaming). Still, I've been wearing Secret Obsession along with the original Obsession for a week, off and on, and it hasn't really captured my affections; the far dry down is lovely, rather like a tarted-up version of Estee Lauder's Sensuous, but the overripe fruits and the hothouse florals in the earlier stages have been done better elsewhere. Instead, I've become more impressed with Obsession than I had been. I had the idea that layering the two might be perfect, but I can't recommend that anyone try that at home: the resulting brew is perfect after a couple of hours, but up until then it can only be described as nasty, and it's potent enough to kill passersby at 20 paces.

Calvin Klein Secret Obsession was developed by perfumer Calice Becker, and is available in 30, 50 and 100 ml Eau de Parfum and in matching body products.