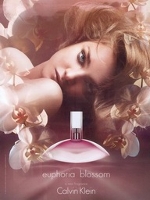 Euphoria starts with sweet fruits; the pomegranate and persimmon are liberally sugared, and the "lush green accord" adds a kind of synthetic freshness that floats above but does nothing to temper the syrupy sweetness. It moves quickly into the dry down, which is blended floral notes mingling with now-indistinct fruits, the whole doused with a warm vanilla cream laced with patchouli, amber and a hefty dose of musk.

It is a deep, voluptuous fragrance, vaguely edible, and rather dark although not overly so — it smells decidedly modern, and there are none of the "musty bits" of a classic oriental. Although it is far too sweet to suit me personally, it has a sultry edge that many find appealing. The sillage and lasting power are extraordinary; in fact, it is no easy thing to remove it from the skin. Whatever else it is, it is not a fragrance for a hot summer day, and it is far too heavy to appeal to the burgeoning Asian market...which leads us to Euphoria Blossom.

Euphoria Blossom, like the original Euphoria, starts with sweet fruits, but the sweetness is considerably toned down and accented here with sparkling citrus notes. The "dewy green accord" is more noticeable simply because it has less competition for attention, and it smells more like a simple (and very fresh) floral and less like a sexy oriental fragrance for the same reason — the base here is relatively quiet, with none of the creamy richness of Euphoria, just a mild little blur of woody musk and amber. The sillage is slight, and the lasting power is so-so.

Euphoria was well-done if not groundbreaking, and I would say the same of Euphoria Blossom, but more so than the original, it has the kind of smells-like-everything-else, been-through-more-than-one-focus-group pleasantness that would make it hard to pick out of a blind smell test at Sephora. If you adore Euphoria and want a lighter version for summer, it might be just the ticket, but I would not be surprised if many Euphoria fans find it a bit more innocuous than they were hoping for.