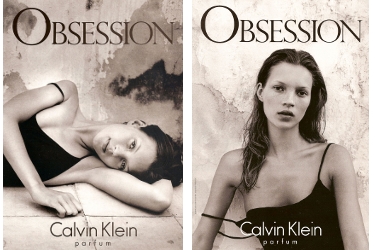 Calvin Klein launched Obsession in 1985, and it was the brand's first blockbuster in fragrance, far outselling the two fragrances that preceded it (Calvin Klein for women and Calvin for men, both long discontinued). Like many of the fragrances of the period, it was not meant to speak softly:

"The name Obsession is big, like a movie poster for this era," said Calvin Klein. "I think of everything I've ever done, how obsessed I was. Everyone is obsessed in the Eighties. And, of course, the name suggests an obsession with someone. A man obsessed by a woman." (via Women's Wear Daily, 1/18/1985)

Obsession hit its mark perfectly; based on the steamy advertising and magazine scent strips, it reportedly sold out at many stores before they even had the first shipment in stock. It continued to be a big-seller well into the 1990s.

The juice, by perfumer Jean Guichard, was appropriately provocative. Obsession is a warm amber-y floriental with soft spices and woods (the notes: mandarin, bergamot, green notes, jasmine, rose, orange blossom, coriander, tagette, armoise, amber and oakmoss); it smells like it's meant to be sexy, and it is. If it also smells loud, bear in mind who it was competing with — by 1987, Obsession was reportedly "rivaling Giorgio, the nation's No. 1 scent". (via Chicago Sun-Times, 12/9/1987)

I didn't wear Obsession in the 1980s, but I remember it well. Like Thierry Mugler's Angel later, it was everywhere, and everyone seemed to be wearing one spray too many (sometimes two or three). One spray, even now, is more than I can tolerate, but a little tiny dab renders it surprisingly tame, even approachable: yes, it's still strong, but most of the bite is in the early stages, where a bitter herbal-green edge laced with spices seems to linger longer than you'd expect it would or could. As it softens, the floral notes are rich, but grounded by the amber, and the vanilla in the base is nicely dry in comparison to today's overbearing dessert-fests. To my nose, it's a pussycat next to Christian Dior's Poison, released that same year.

I can't say I much care for Obsession even now, but in some ways, it's a more wearable scent than I'd remembered, and it smells markedly less dated to me than the other statement fragrances of the 1980s. I'll leave it at that, and close with a few expert opinions:

Obsession is rather like a ground-to-air missile, programmed to burst through any defence system to hit its target. It's a perfume which is out to win, and does, one way or another, with its pounding pervasiveness, persistent sensuality, and unbridled suggestiveness. (John Oakes, The New Book of Perfumes, p. 210)

A triumph of timing over substance...[Obsession] filled a very large oriental-shaped hole in the market. (Luca Turin, Perfumes: The Guide, p 265)

Ann Gottlieb, who art directed the scent, briefed the perfumer to do 'sensuality with a touch of raunch' and 'classy with a touch of trash'. She got it, but with the emphasis reversed. (Susan Irvine, The Perfume Guide, p. 138)