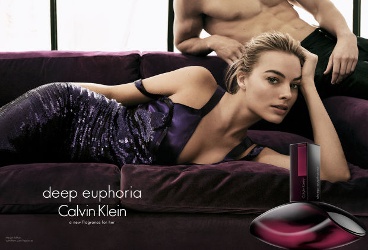 I really don't consider myself a perfume snob. Yes, I do favor quite a few fancy niche fragrances, but my tastes still run the gamut. Case in point: I've loved Calvin Klein Euphoria ever since its launch in 2005. I remember making a visit to Lord & Taylor during a lunch break, spraying some Euphoria on my arm, and swooning in delight. I couldn't wait to describe my reaction on MakeupAlley that evening: "Oh my! I felt as though I'd been kissed."

So now, more than a decade later, we have the latest Euphoria flanker: Deep Euphoria, described as a floral chypre with a "signature of sensuality and modern femininity" and "a smooth, sensual texture." (Whatever that means.) Its composition (developed by perfumer Honorine Blanc) includes notes of Cascalone, white pepper, mandarin leaves, "black magic rose," peony, jasmine, musk and patchouli. Its promotional ads feature actress Margot Robbie dreaming or fantasizing about a neon-lit loft party populated by numerous shirtless young men, so it seems designed to conjure up a mood that's hedonistic as well as euphoric.

Deep Euphoria didn't make me swoon like its big sister did all those years ago, but it's been holding my interest for the past few days. It starts off with the white pepper and a very sharp, sheer citrus note. The citrus fades, as does a fleeting note of red fruits that reminds me of the original Euphoria, but the pepper lasts. Another dominant and persistent note is the Cascalone. As used in Deep Euphoria, it comes across as a briny marine accord that reminds me vaguely of the "caviar" — or as Robin described it, "inky-iodine-dark-salty stuff" — in Thierry Mugler's Womanity. (An aside: "Cascalone"? Why? I don't understand the current vogue for calling certain synthetic raw materials by their trademarked names, but not others. If you have "black magic rose" on the list of notes, why not substitute "ocean jetty" or "sea stone" for "Cascalone"?)

I actually like the slightly dirty seawater effect of Cascalone here, even as it's followed by the very clean musk and modern patchouli in Deep Euphoria's base. Not surprisingly, there's nothing going on that I'd describe as a proper "chypre." The fragrance's development goes linear and a bit flat over time, leaving an oceanic/wood dry down with average staying power on my skin. Despite its come-hither, morning-after commercial, Deep Euphoria could be worn to most workplaces just as easily as to a party. 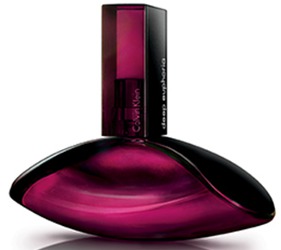 Deep Euphoria doesn't feel particularly "deep," and I wouldn't have guessed its relationship to Euphoria if I smelled it out of context, but I'm enjoying it enough to use up my sample vial. It's not a conventionally feminine mainstream fragrance, yet reviewers on the Sephora website seem to like it so far; maybe it will do well and stick around, unlike most other Euphoria flankers? Well, euphoria itself tends to be fleeting, so only time will tell.