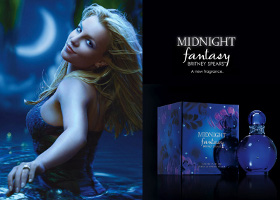 Midnight Fantasy is the fourth and latest fragrance release from Britney Spears, and is meant as the sexy, late night ("a mysterious realm of temptation and intrigue") follow-up to 2005's Fantasy. It was created by perfumer Caroline Sabas, and the notes include black cherries, framboise, plum, orchid, freesia, iris, musk, amber and vanilla. The bottle (see it here) is the same as Fantasy's, done up in dark blue.

If you were expecting a darker, warmer take on Fantasy's medley of cupcake and sweet fruits, Midnight Fantasy may come as something of a surprise. The top notes, like those of Fantasy, are largely candied fruits, and as has been pointed out numerous times on MakeupAlley, it smells an awful lot like grape Kool-Aid. Thankfully, it calms to a more palatable (if still relatively sweet) berry-ish sort of mixture fairly quickly. The heart notes add an entirely anonymous blur of sheer florals, and the base is velvety but surprisingly pale and clean: I waited for something va-va-voom, but I waited in vain.

The original Fantasy did not strike me as a particularly sexy fragrance, but Midnight Fantasy is even less so — once the burst of fruit settles, it is comparatively bland and lacking in personality. It is is easily my least favorite of the line so far. It didn't even make me laugh (thank you, Paris Hilton Heiress).