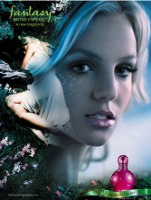 Fantasy is the second fragrance release from Britney Spears under the Elizabeth Arden label. It follows Curious, which apparently made a tidy 30 million in its first three months alone. Fantasy was created by nose Jim Krivda, and the notes include red lychee, golden quince, kiwi, cupcake accord, jasmine, white chocolate orchid, musk, woods, and orris root.

I should begin by admitting that I am so entirely outside of the target market for this fragrance that my opinion is pretty much meaningless. To start with, I am more than a few years past the age cohort of interest, which is said to be 18-30. My advanced age, perhaps, explains my second handicap, which is that I only vaguely know who Britney Spears is, and it may also explain the fact that I do not find the bottle design particularly appealing.

I did recently (finally) try Curious, and found it a pleasant enough light fruity floral. It is not something I would wear, but it is considerably more wearable than I had expected. Fantasy, for those of you who follow such things, is meant to capture Britney's new, grown-up status, according to a brand spokesperson:

Curious was about taking chances, being rebellious, bold and young. Fantasy is more romantic and sexy. Now that Britney is married and starting a family, it's time for a more seductive, elusive fragrance. (via Women's Wear Daily)

Fantasy starts with tart fruits, but that lasts nanoseconds. Then it is very sweet fruits and the promised cupcake accord, which smells pretty much like a vanilla cupcake with a little dab of chocolate icing. The sweetness (and the bakery vibe) lessens considerably as it dries down to warm, creamy, musky woods with very subtle hints of vanilla and chocolate and the tiniest whisper of a floral note. It is not a terribly complex fragrance, but it does have more depth and sophistication than Curious, and it is nowhere near as one-dimensional as Aquolina Pink Sugar, to which it is frequently compared.

Given that my expectations were low, I was pleasantly surprised. I wouldn't go so far as to say that I like it, but I don't hate it, and if given the choice between this and say, Miss Dior Cherie, I would pick Fantasy. As celebrity scents go, however, I would say that Sarah Jessica Parker has done the best job so far this year, at least of the few that I have tried.

Fantasy is an Eau de Parfum, and is available in 50 and 100 ml bottles or in a "Work Your Magic Body Souffle". It is available at most major department stores and will undoubtedly be at the discounters soon.