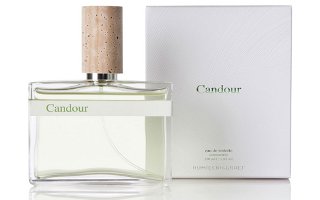 ...a fragrance that is inspired by the feeling of attachment. It is the brand’s ninth eau de toilette concentrée and engages, as do all perfumes by Humiecki & Graef, one aspect of the broad spectrum of human emotions.

Candour expresses the irreplaceable gift of mutual empathy, which is based on a commonly shared experience of two kindred spirits.

The name Candour describes the emotional state of the particular directness and open exchange between two (connected) people who have left the tentative phase of their relationship far behind. Two people who have developed their own intuitive language. The inspiration for the fragrance by Humiecki & Graef is the moment when these two people, who have gone their separate ways, meet up once again.