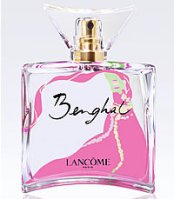 The next fragrance from Lancome's Collection Voyage (see Tropiques, the first in the series) will be Benghal, inspired by India.

Look for it in travel retail starting in February 2007, unfortunately, no word yet on what it smells like. (via moodiereport)

Update: the notes for Benghal are ginger, mandarin, jasmine, osmanthus, apricot, musk and sandalwood. (via osmoz)

Spanish singer and actress Rosario Flores will launch her first fragrance, Alma, this month in Spain, next year in Latin America. "Composed by Perfumería Gal nose Manolo Barrado, the woody floral features a lingering ambery back note." (via cosmeticnews)