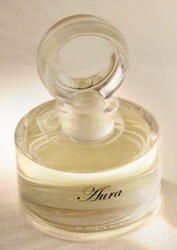 As previously reported, Thierry Mugler has released a set of perfumes in conjunction with the recent European release of the movie version of Patrick Suskind's Perfume.

The coffret includes a booklet "explaining the inspirations and interpretations of the novel and film excerpts that inspired each of the creations". (via Women's Wear Daily). Aura, the one fragrance in the set that is scheduled to be released as a stand alone product, is "a creative interpretation of the bewitching magic spell cast by the 'virtuoso, terrifying scent of Grenouille'" (via osmoz), and is "designed to enhance and intensify any fragrance with which it’s worn — or it can be used by itself":

To ensure that Aura harmonizes with fragrances from each of the 12 main fragrance groups, the elixir’s formula contains at least one ingredient from each group. Unlike most conventional compositions, Aura is not structured according to top, middle and bottom notes. Not only is the fragrance designed to intensify other perfumes, but it was created “to create an abstract aura around a person,” said [Vera] Strubi. (via Women's Wear Daily)

For more information about each fragrance, visit the (link no longer active, sorry!), which will begin selling to customers in the United States next month. At that time, presumably there will be English translations; for now, your choices are French or German.