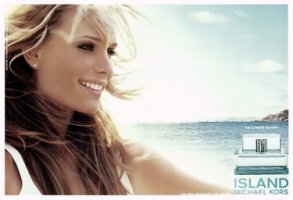 Michael Kors, who is reportedly "island-obsessed" (he grew up on Long Island and seems to be constantly jetting off to one or another island paradise), launched Island, his third fragrance for women, in 2005. He noted at the time that...

Island was developed by perfumers Christophe Laudamiel and Loc Dong, and the notes are a good indicator of what is to come (and they aren't always): Kauai waterfalls, oxygenated water, Chinese kiwi, hydroponic honeysuckle, parrot tulip, champaca flowers, ginger lily, shimmering Bulgarian rose, stephanotis, white bark accord, Galapagos driftwood and rice fields. It sounds like a fresh ozonic-aquatic scent, and it is. If you read this blog with any regularity, you probably already know I'm not likely to like such a thing, and Island is a perfect example of why.

Island starts off with crisp air and water, and lots of it (it is very fresh, and very diffusive), enlivened by sheer fruity notes. The florals come on rather quickly. They are supposed to be "rich humid florals", and the floral notes are moderately heavy for the first hour or so, but they're blurred and softened by all the fresh air and water; Island's heart is softly spicy and undeniably pretty, but it reads as tropical flowers smelled from inside your air conditioned hotel room. If you want "rich humid florals", try Annick Goutal Songes, or for that matter, Michael by Michael Kors. The base is clean woody musk; it starts off pale but gets darker (and more driftwood-ish) over time. Near the end, there is a tiny little smidgen of something powdery-creamy that might be the "rice fields"?

Here is the thing: I have nothing against overtly synthetic perfumes, and nothing against abstract flowers — my complaint about the "rich humid florals" speaks to the ad copy, not the scent itself. And it isn't really that I don't like the smell of aquatic notes. Remember New West? I loved New West. But since then, the whole floral aquatic genre has been so massively overdone. It is hard to smell anything with substantial marine notes these days and not immediately think Generic Department Store Fragrance.

More than that, this has become the smell of functional scented products: air fresheners, laundry detergent, dryer sheets, you name it. Some people complain that any lemon perfume reminds them of cleaning products, and that is exactly how I feel about fresh ozonic-marine fragrances. Even a well-constructed aquatic fragrance reminds me of dryer sheets; a really fabulously well-done aquatic fragrance evokes a top notch dryer sheet.

If you like marine notes, do give Island a try. It's considerably more interesting than many others of its ilk. A couple of hours in, when much of the freshness has worn off and what is left is mostly bark and driftwood with a lightly creamy finish, I start to really like it. And I love that squat tinted bottle, said to have been inspired by the "sparkling waters of the Caribbean". 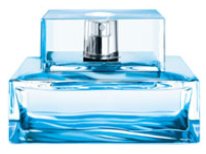 Island was followed by two limited edition flankers: Island Fiji and Island Hawaii. I never tried either on skin, but on a card, I liked one of them and didn't like the other (and can no longer remember which was which). To my mind, neither was as appealing as the original Island, but reportedly both scents sold very well. Island Capri (shown) is the latest edition; it features sparkling orange bigarade, crisp green Italian basil, bergamot, rose petals, violet de parma, jasmine blossom, fig, olive tree accord, white moss and sensual skin accord.

Island Capri is clean, but it isn't as massively fresh as the original Island, and nothing about it reminds me of dryer sheets. The top notes are sharp, sparkling citrus, with the basil adding a nice kick; for a few minutes, I was reminded of a softer version of Guerlain's Mandarine Basilic. After that, the sparkle fizzles out and it gets sweeter and more figgy-fruity-floral-ish. It is a light scent, very summery and sheer, and sort of reminds me of a blander Un Jardin en Méditerranée (Hermès), with more flowers and less wood.

Island Capri isn't exactly bursting with personality — I've worn it four times now, and I have a hard time remembering it with any distinctness once it's worn off — but its pleasant enough, and very wearable. I don't see why it shouldn't sell as well as Fiji or Hawaii. Unlike some flankers, which hang around on counter so long you forget that they're limited edition, the Michael Kors Island scents tend to disappear relatively quickly. If you want Island Capri, you perhaps ought to pick up a bottle soon.