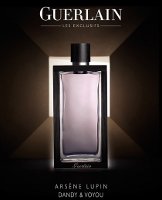 A fragrance named after a fictional thief? Possibly Jean-Paul Guerlain's last fragrance? A leathery oriental? I had to try Guerlain Arsène Lupin Dandy.

While I waited for my decant to arrive, I boned up on Arsène Lupin. Maurice LeBlanc created Arsène Lupin in 1905 as the antihero of a series of short stories. Lupin is a sybaritic thief with a keen eye for furniture, paintings, jewels, and pretty ladies. He plans his heists more for the challenge than the loot. In one typically Lupinesque caper, he writes to a Baron who lives in a heavily guarded mansion on a rocky island in the middle of a river. He instructs the Baron to deliver certain of his treasures to him by a particular date or he'll steal them and more. (He adds not to bother with the larger Watteau in the dining room, because it's a fake, just in case the Baron isn't aware.) The clincher is that Lupin writes the letter from jail. The Baron refuses Lupin's request, and even hires protection for the night Lupin threatens to break in. Sorry Baron. Hope you were insured.

LeBlanc's Arsène Lupin stories were hits, so LeBlanc branched into Lupin novels, including one pitting Lupin against Sherlock Holmes. A friend lent me the 1910 English version, and I haven't finished it yet, but so far Holmes isn't looking good and Watson is made out to be a real dunderhead. The novel irked Arthur Conan Doyle so much that he threatened to take LeBlanc to court if he persisted in using Sherlock Holmes' name. As a result, look for the novel under the title Arsène Lupin versus Herlock Sholmes.

Dandy's peppery bergamot kicks off the fragrance like the loud fanfare starting a race. Except this race features a lot of sitting around in a library sipping Turkish coffee and reading leatherbound books. After a bracing two seconds that had me fearing a manly fougère, Dandy quickly shifted down into a warm, cardamom-infused floral bolstered by quiet leather turned skin-like by musk and a hint of patchouli. The combination of cardamom and violet almost smells like tea as it warms on my skin. The violet isn't the violet of candy and face powder, but is fresh and green. Tonka's creamy sweetness grows over the first quarter hour, reminding me Dandy is a Guerlain. I can almost smell a pinch of cocoa powder, too.

Despite all this talk of leather, cocoa, and cardamom, Dandy never feels heavy. In that way, it reminds me of Annick Goutal Duel, another fragrance replete with warm, spicy, leathery notes that remains bright and fresh. Dandy wears close to the skin, too — maybe a little too close for my taste. You could easily wear three or four sprays to work and not have anyone further than the other side of your desk notice it. But I guess if you're a cat burglar, that's the way you want it.

Guerlain Arsène Lupin Dandy is part of the Parfums Exclusifs collection and is available in 100 ml Eau de Parfum. For information on where to buy it, see Guerlain under Perfume Houses.