I remember reading an interview with Meryl Streep ages ago where she said she never ran for a bus, because there would always be another one coming along pretty soon. (I agree with the spirit of that statement but there must be exceptions: I’d swallow my pride and run for a midnight bus if that were the last bus till morning.) I try to have the same attitude about discontinued or hard-to-find perfumes too: I’ll never run after one (crying at its departure, and pitying myself for not stocking up — how embarrassing!) Not too many years ago I would have added…“because another perfume will arrive to take its place.”  These days, due to the restrictions on so many perfume ingredients in Europe, perfumes won’t be arriving that can take the place of old standards of perfumery. Most new perfumes can’t conjure the past convincingly, which leads me to the topic of reissues of venerable fragrances.

Guerlain Derby was created by perfumer Jean-Paul Guerlain and released in 1985. Sometime in the 90s, I bought Derby, unsniffed, and was not a fan (I gave it to my mother, who enjoyed it); recently I decided to obtain some vintage Derby and compare it to the current reissue in Guerlain’s Les Parisiennes collection. I hoped I wouldn’t love Derby, old or new, because the old sells for an average of $500 for a 100 ml bottle and the new is hard to come by. 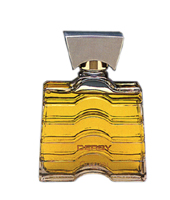 Original Derby, classified as a leather chypre, included notes of lemon, bergamot, artemisia, peppermint, pepper, mace, pimento, rose, jasmine, leather, sandalwood, patchouli, vetiver and oak moss. Original Derby opens with dense, syrupy lemon-bergamot (shall we say “reduced” citrus?) A rich pepper and mace accord comes next, with the first hints of leather and oak moss. As spices subside, leather and, especially, moss come to the fore (with a touch of “clove”). In original Derby’s extreme dry-down, there’s still moss present, and it’s joined by vetiver, “butterscotch” sandalwood and sweet patchouli. Original Derby is long lasting, and even a dab on the wrists produces sillage.

Original Derby is a bold, heavy-hitting “adult” perfume without a hint of youthful airiness or playfulness; it’s serious. And it’s MOSSY. I like oak moss as an accent in perfumes, but when oak moss takes over a composition, I cringe. Heavy oak moss makes me feel frumpy, as if it were 3 p.m. and I was still walking around my house in pajamas: old pajamas stained with my noon breakfast in bed of last night’s pizza. Original Derby suffocates me with moss, and its “feminine” vintage vibe doesn’t suit me either — it smells old fashioned.

“New” (reissued) Derby does not have the complexity or heft of original Derby. When I put it on, I immediately smell today’s version of (allowable, IFRA-approved) “moss” — light and bright (and preferred by yours truly to real oak moss…there, I’ve admitted it!) Add to that sheer moss a splash of fizzy galbanum/green notes, bergamot and vetiver and you have new Derby. New Derby smells as if original Derby has been diluted and rejuvenated/freshened (which may suit many people); oak moss seems to have been largely replaced with green notes, and though a ‘sprig’ of fresh flowers (jasmine? “vague” orange blossom?) is apparent in new Derby’s mid-development, new Derby smells more masculine than original Derby. The “spirit” of original Derby is there in the reissue…but without the moss-overdose and mega-sillage. (When applied liberally, new Derby will last on skin an entire day.)

Of the two fragrances, I prefer new Derby; it’s a nice spring-y “green” perfume. Original Derby’s heavy leather-moss combo is a no-go for me; it reminds me of an old nemesis who coated herself in Estée Lauder Azurée.

So, as Derby fades into the distance, I shall remain standing at the perfume stop (non-panting, calm, dignity intact) waiting for the next arrivals. I won’t have long to wait; the perfume “bus” never takes a break, never goes on strike.

(New) Guerlain Derby is available in 125 ml, in the wood-accented bottle shown above.