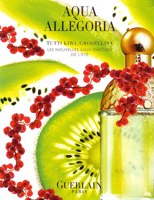 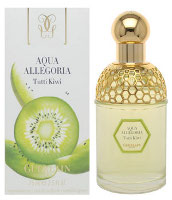 Tutti Kiwi is one of the two entries for 2006 in Guerlain's Aqua Allegoria range. The Aqua Allegoria fragrances tend to be lighter, younger and simpler in composition than those in the regular line, and they are basically limited editions: if they do well, they hang around, but otherwise they hit the chopping block in short order — last year's Orange Magnifica has already disappeared from the Guerlain website, as has my favorite Aqua Allegoria, Anisia Bella. Tutti Kiwi is attributed to perfumer Jean Paul Guerlain, and the notes are tangerine, rhubarb, frosted lemon, kiwi, geranium, mock orange, sandalwood, vanilla and woods.

I will start with a disclaimer for anyone who isn't a regular reader: I don't particularly love fruity florals. Beyond that, kiwi is firmly entrenched very near the bottom of the list of fruits I'd like to smell on my person. The first few minutes of Tutti Kiwi, however, were a pleasant surprise: a crisp and sparkling blend of rhubarb and citrus, very tart and slightly green. After that, the kiwi kicks in along with vague floral notes, and the crisp and sparkling part eventually gives way to a rather indistinct fruity floral over a Guerlain-ish base of sandalwood and vanilla.

It is a cheerful, summery fragrance, sweeter than I'd like but not so sweet as to smell like something marketed to the pre-teen set. If you like kiwi, it might be just the thing for you. I do like it better than last year's Orange Magnifica and Pivoine Magnifica, both of which struck me as relatively bland for the Aqua Allegoria line, but I have no desire whatsover to own or wear it. I'm waiting to smell Grosellina, the other Aqua Allegoria for 2006, although I'm not sure red currant will be my thing either. Please comment if you've tried it.

Tutti Kiwi appears to be exclusive (online, anyway) to sephora at the moment, but can also be found at Bergdorf Goodman and will eventually be sold at most major department stores. And of course, it is bound to hit the discounters eventually.