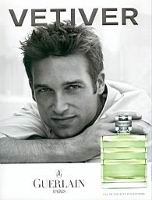 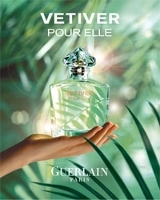 Guerlain Vetiver was the first solo fragrance effort by Jean Paul Guerlain, the great grandson of Guerlain founder Pierre-François Pascal Guerlain. Reportedly created for the South American market, the fragrance was released in 1959 and relaunched in 2000. I never smelled the original version, so I cannot say to what extent it was reformulated at that time, but according to the reviewers on basenotes, this is not your father's Vetiver. It has notes of orange, lemon, bergamot, pepper, coriander, nutmeg, oakmoss, tobacco, and tonka bean.

Vetiver starts with a bright, almost aggressive burst of citrus. There is a dusty buzz of spices which eventually settles into recognizable notes of pepper and nutmeg, and they last right through the dry down. There is also vetiver, and oakmoss, and in the far dry down, quite a bit of tobacco. There is said to be carnation, and possibly other floral notes, but they are not in the least noticeable to my nose.

Of all of the vetivers I have tried, Guerlain's strikes the best balance between fresh and earthy notes. It feels clean and fresh, but without resorting to any of the ozonic or marine notes that characterize clean in modern perfumery. And it is beautifully earthy and mossy, but it is not the uncompromising, take-no-prisoners earthiness of say, Maître Parfumeur et Gantier Route du Vetiver.

It is classy, sexy, and a perfect fragrance for hot summer weather. I suppose it is masculine, maybe even quintessentially masculine, but all the same I have never felt out of bounds wearing it, and I do have my limits; M7 I wear only in the privacy of my own home. It is available only as an Eau de Toilette. There is also a limited edition Vetiver Eau Glacee/Frozen version, but I have not tried it.

Like Dior's Eau Sauvage, Vetiver has long been "borrowed" by the ladies, so it is rather surprising that Guerlain waited until last year to release a feminine version. Vetiver Pour Elle was released as a limited edition in duty free, and there, sadly, it remains. It features bergamot, orange blossom, honeysuckle, muguet, nutmeg, vetiver, and tonka bean.

Vetiver Pour Elle is less aggressively citric at the start, and considerably more floral — e.g., more conventionally feminine. The top notes smell like those advertised: orange blossom, lily of the valley, and a touch of honeysuckle, after the top notes fade, it smells like orange blossom and jasmine. The spices are much lighter and the tonka bean, which I do not really notice in the men's version, is more pronounced.

It is a pleasant enough fragance, but worn next to the men's, it smells rather wimpy and insubstantial. Perhaps that is how many women would prefer it? What is missing, besides the pepper and tobacco, is the vetiver. I can smell some vetiver, mind you, but it would be straining to call this an earthy fragrance until the flowers have just about faded away entirely.

It is certainly worth a try if you find the men's too much, but otherwise, I would think you would do better to stick to the regular, or layer it with a light floral. Another option, especially if you can't get your hands on the Pour Elle, is to try a more unisex vetiver like Creed Original Vetiver.

The men's version of Vetiver can be purchased just about anywhere. Vetiver Pour Elle, as I mentioned, is stuck in duty free, and in limited distribution at that. If you know where to get it, please tell!