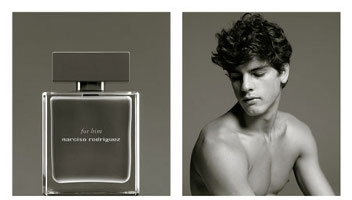 Rarely do “simple” fragrances (scents with few ingredients or little development) hold my attention or gain my affection. I prefer perfumes that change their expression several times a day — perfumes that make a journey. The uncomplicated scents I do wear tend to be classic compositions made with rich ingredients (woods/resins, spices, incense or leather notes). I own several fragrances whose development is minimal: Christian Lacroix’ Tumulte (pour homme), Maître Parfumeur et Gantier’s Parfum d’Habit and Hermès Bel Ami. These warm scents begin with a glint, a spark, and settle almost immediately into a long-lasting glow — Narciso Rodriguez’ For Him is such a scent.

For Him is fashion designer Narciso Rodriguez’ debut men’s fragrance. "This fragrance is the first extension of my men's wear collection," Rodriguez told Women's Wear Daily (May 18, 2007). "It is an important component of the total image, an expression of the man. For Him enhances the existing foundation of my vision for men's wear and is the first of many categories to come." For Him was created by perfumer Francis Kurkdjian and is composed of violet leaf, patchouli, amber and musk. According to Parfums Narciso Rodriguez Vice President, Nathalie Helloin-Kamel (also quoted in WWD), For Him’s inspiration came from an earlier era of men’s perfumery: “The benchmark was the great fougères of the Eighties."

Recently, a generous NST reader sent me a sample of the discontinued Fougère Royale; it is a marvelous scent. Fougère Royale contains bergamot, lavender, sage, geranium, orchid, heliotrope, carnation, rose, oakmoss, tonka bean, vanilla and musk. On me, this scent is dry and bracing, with a wonderful harmony created by the lavender, heliotrope, oakmoss and vanilla. I fell in love with Fougère Royale and immediately went into mourning. Why did Houbigant delete one of the most innovative, delightful and interesting fragrances from its product line?

Over the years, the fougère category of fragrance has expanded to include fresh fougères, floral fougères, sweet amber fougères, spicy fougères, woody fougères, aromatic and even fruity fougères. Here’a a mini-list of Eighties’ fougères that may have influenced Kurkdjian as he formulated For Him — Calvin/Calvin Klein (1981), Drakkar Noir/Guy Laroche (1982), Tuscany Per Uomo/Aramis (1984), Boss/Hugo Boss (1986), Jazz/YSL (1988), Gucci Nobile (1988) and 1989’s Tsar/Van Cleef & Arpels. Two of my favorite modern fougères are Hermès Equipage and Balenciaga’s Ho Hang.

Narciso Rodriguez’ For Him (in the Eau de Toilette form) possesses the sweetness of new grass, damp moss, and wet bark. For Him opens with a green “gust” of violet leaf. Violet leaf is refreshing and smells of young grass; on my skin it often produces a crisp and clean vegetal aroma reminiscent of watermelon rind and cucumbers. For Him’s opening smells grassy — with hints of moss and an accord that brings to mind lavender (leaf) and pine. For Him makes a quick transition from green notes to sheer woods and patchouli/amber. For Him’s amber, musk and patchouli are well blended, clear and soft — not too vanillic, not at all animalic. I’ve been wearing Christian Dior’s Jules over the last week and immediately noticed a resemblance between it and For Him; Jules is longer lasting and sweeter, but both fragrances possess a vibrant woody-green character.

For Him is not a groundbreaking perfume, but it is nicely composed and a pleasant change from most recently released mainstream men’s fragrances; For Him doesn’t smell like a “department store” fragrance. (I’m hoping it will be a big seller over the holidays; I’d much rather smell For Him everywhere come Dec. 26 than the usual suspects: fresh-airy/marine scents.) For Him lasts on my skin for over 5 hours but its scent stays close to the body; it is a pleasure to wear a fragrance that smells powerful, yet doesn’t overpower a room. For Him can be worn by men or women.

Narciso Rodriguez For Him comes in a 50 ml Fragrance Oil ($150) and in 100 and 50 ml Eau de Toilette sprays ($72/$54); the scent is also available in shave lotion, after shave emulsion, shower gel and deodorant. 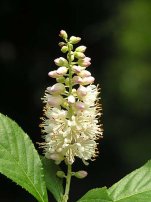 Note to Gardeners: if you love classic fougère fragrances, consider planting a Summersweet in your garden (Clethra alnifolia). The Sixteen Candles variety blooms profusely and the flowers’ aromatic scent reminds me of old-fashioned fougères like Fougère Royale.

Note: Summersweet image by Will Cook at carolinanature.