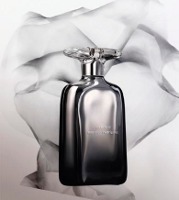 "This one has been selling like crazy," the dark blonde woman in the suit told me as she hoisted the gorgeous, silvery bottle of Narciso Rodriguez Essence Intense. "At the fragrance festival last week we sold six bottles in two hours at $110 a pop. It's been doing so well that I wouldn't be surprised if they add it to the regular line-up."

I was at Nordstrom trolling the perfume area for something new to smell, and by chance I happened on the Beauté Prestige rep who handles Narciso Rodriguez as well as Annick Goutal, Hermès, and a few others. She sprayed a generous slick of Essence Intense on the back of my hand (my forearm was already occupied by Chanel Bois des Iles) and awaited my reaction. While the fragrance settled, I admired the fragrance's heavy, wavy bottle, this one with a darkened stripe toward its bottom to set it apart from the regular Narciso Rodriguez Essence.

I lifted my hand to my nose. Aldehydes, orange flower, rose, metallic soap. "It kind of smells like the original, doesn't it?"

Side by side, Essence Intense and Essence are definitely related but not the same scent. Still, I think Essence Intense is a little ambitiously named. "Essence Slightly Warmed" might be a better, if not really marketable name. Maybe "Evening Essence" would work. The original Essence smells to me like linen ironed with rose, iris, and orange-flowered tinted steam. It is diffusive, soapy, slightly metallic, and stings the nose with aldehydes.

Essence and Essence Intense both stay very close to the skin and have similar persistence — about four hours on me, and I can only smell it if I press my nose to my skin. The Essence body cream, made by Shiseido, is marvelous. Applied after my evening bath, it lasts through the night and day to be washed off at the next night's bath, but it never feels heavy or greasy. Its fragrance is subtle. As far as I can tell, though, it doesn't do a thing for the Eau de Parfum.

So many people these days say they don't like perfume. They like the smell of freshly washed skin. If I were Santa, I'd put a bottle of Essence Intense under the trees of every one of those people who favors velvet. I'd put a bottle of Essence, the original, under the silk wearer's trees. The Essences were made for them. The thing is, I do like perfume. When I want to smell of clean skin, I'll go with the salty, fresh iris-suede of Parfums DelRae Mythique.

As I waited for the rep to fetch my samples, I talked to the sales associate, the glamorously named Bruce Terrible. In front of us were testers of the Chanel Les Exclusifs. "Do you have the 100 ml size yet?" I asked.

Hmm. The same price as the 100 ml Essence Intense Eau de Parfum. I sniffed the Bois des Iles on my wrist. No contest.