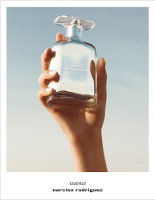 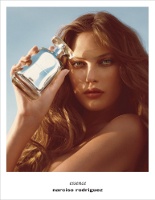 The Rodriguez press machine describes Narciso Rodriguez Essence Eau de Parfum as a "floral powdery musk" with iris, rose, benzoin, amber, and musk notes. It is marketed as a daytime scent that is both clean, like "liquid sunshine", and sexy. Superstar perfumer Alberto Morillas created it. The sales associate who gave me a sample of it said that in her training on Essence, she learned that unlike some brands that target their scent to a targeted slice of perfume buyers, Essence is suitable scent for everyone from teens to senior citizens.

So, what kind of fragrance is sexy and clean and suitable for you, your niece, and your grandma? The answer: a scent that smells like a hot steam iron pressing a linen dress that had been stored with a sachet of dried flower petals. Essence smells of the metal of the iron, the steam, and the distant impression of a jumble of flowers too mixed to pick out just one.

For a while this is perfect, especially if a whistling-clean fragrance is what suits you. But after half an hour, Essence's bit of sweet meadow fades, and the steam-iron-like blend of musk and aldehydes turns chemical and demanding on my skin. It smells all out of balance, like listening to only the soprano half of a duet.

The good news is that for those of you who don't like powdery scents, Essence isn't particularly powdery — at least, not in the old-fashioned, face powder way that Lorenzo Villoresi Teint de Neige or Molinard Habanita are. Iris lovers will be able to smell a smidgen of iris. The musk in Essence is very clean without being particularly soapy. And Essence's bottle is tall, wavy, mirrored, and feels good to hold.

Now for the not-so-good news. If you aren't a fan of blatant aldehydes, stay clear of Essence or suffer a sucker punch of them. Also, although Essence smells clean, it isn't especially subtle, and to me it isn't even remotely sexy. Then there's the problem with its high-pitched drydown.

Yes, Essence would certainly suit a man or a woman of just about any generation. But, I think Essence would find its happiest home with someone who vacuums her car out regularly, is afraid to order sushi, and loves Kevin Costner movies. For those of us messier and maybe more passionate types, we can save our money by leaving this one on the shelf.

Narciso Rodriguez Essence Eau de Parfum is available in 50 and 100 ml, and in the United States is currently exclusive to Saks Fifth Avenue.