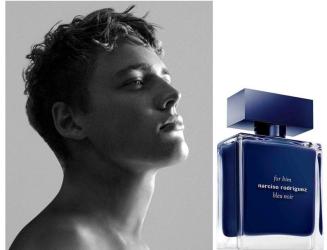 "I love blue so dark that it appears black. I like black which takes depths of dusk." — Narciso Rodriguez.

Judging from the Narciso Rodriguez perfume line, I think Rodriguez may be more inspired by color (fabrics, packaging) than odor, for when it comes to the men's perfumes at least, I say: 'Love the bottles...don't need the colognes.' The Rodriguez men's offerings have been nice enough, but never possess a 'certain something' that makes me crave them.

For Him Bleu Noir is a flanker to 2007's Narciso Rodriguez For Him and is categorized as an aromatic fougère fragrance; its listed notes include nutmeg, cardamom, musk, cedar, ebony, vetiver and amber (not very fougère-y notes, which is fine for someone like me who usually dislikes that genre). Many guys have commented online that For Him Bleu Noir reminds them of Cartier Déclaration or Hermès Terre d'Hermès (both developed by perfumer Jean-Claude Ellena)...more on that later.

For Him Bleu Noir goes on smelling a bit "sweaty" (bigarade? grapefruit?); this phase is reminiscent of Déclaration. Next up is cardamom with a smidgen of silky "cosmetic" cedar (nothing to remind you of nature, plenty to remind you of a department store men's fragrance bar.) Almost all the For Him Bleu Noir notes are blurry (well-blended). For me, the base of For Him Bleu Noir is most like Terre d'Hermès: light, semi-sweet musk and vetiver, with lingering (now talc-y) citrus. 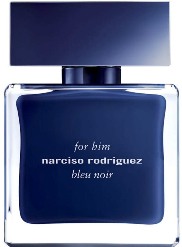 Surprisingly, as of today, many months into launch, the Narciso Rodriguez website does not feature even an image of For Him Bleu Noir, let alone a video or dedicated website!

Narciso Rodriguez For Him Bleu Noir Eau de Toilette is available in 50 ml ($68) and 100 ml ($89). Currently, it's a Nordstrom exclusive (does that mean even Narciso Rodriguez itself can't feature the perfume on its website?)