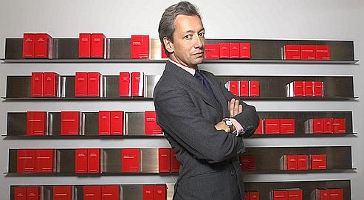 Niche perfume house established in Paris in 2000 by Frédéric Malle, the grandson of Serge Heftler-Louiche (childhood friend of Christian Dior who helped establish the Dior perfume brand) and nephew of the late Louis Malle.

Malle "curates" the work of well-known perfumers: they are given some degree of creative freedom, and the brand focuses on quality materials instead of expensive packaging. Malle was inspired by the prestigious French publishing house Gallimard, which packaged its books in plain, cream-colored covers with simple red lettering:

"Not only did Gallimard publish the best authors in its time, but its books also look like nothing else," Malle explains. He likens the books to other timeless designs, such as the Porsche car and the Leica camera. "I said to myself, 'I'll do an Editions de Parfums like Editions Gallimard,'" Malle continues. "The idea was to put them in direct contact with the public, without the filter of a brand." (via W Magazine, 3/1/2001)

In 2014, Editions de Parfums was acquired by Estee Lauder.

The Editions de Parfums line can be found online at Aedes or Barneys in the US, or at Les Senteurs or Liberty in the UK.

Malle has a free-standing store on Madison Avenue in New York, another in the West Village, and a counter at Barneys New York. There are also 3 boutiques in Paris.

See all articles on Now Smell This tagged Frédéric Malle.

Malle talks about his favorite places in France in Frédéric Malle’s Guide to France at Travel + Leisure.