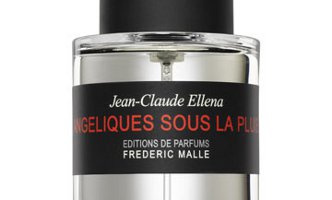 While the rest of the nation has suffered from heat, we’ve had moderate temperatures and summer rain. I’m not talking about the wild, ozonic thunderstorms that erupt late afternoons in the eastern states. (How I miss them and fireflies.) I mean cold rain that eases earthy smells from the city, while soft, warm air pillows its splatter. In other words, it’s been perfect weather for Frédéric Malle Angéliques sous la Pluie.

To me, Angéliques sous la Pluie is all about texture. The fragrance kicks off with an assertive pepper tinged with fusty coriander and gin-like juniper. This is the part that reminds me of the rain. It is bitter, sharp, and cool. The coriander dirties it, separating the fragrance from the opening of peppery colognes like Marc Jacobs Bang. At this point, Angéliques sous la Pluie smells traditionally masculine. But what sets the fragrance apart from other peppery colognes is what happens in the next fifteen minutes. A warm, round musk accented with sweet wood fluffs up Angéliques sous la Pluie, changing its character completely. The musk isn’t clean like laundry or dirty like perspiration, but is the classic, sweet musk that made Jovan famous. Except that there’s no way you’d mistake it for Jovan.

This musky, woody landing is similar to what sets a summer rain apart from a long, drizzly winter — and believe me, living where I do I know what I’m talking about. In winter when it rains, you’re simply cold and perpetually damp. Bare trees are hung with wet-black branches, and the world seems cement gray from street to sky. In summer, warm air lightens and softens the rain. Raindrops feel rounder. They fall on full-blown roses and absorb into humid asphalt. The play of sharp, dry pepper against gentle, sweet woody musk is nice to smell but even more wonderful to feel, just like a late July rain.

Angéliques sous la Pluie is a refreshing, quiet fragrance that lasts about half a day on my skin. Ideally, I’d spray myself liberally with it before I left for work, then punch up its musky side with a spritz of, oh, L’Artisan Parfumeur Dzing! or even Worth Courtesan for evening. I’ve been enjoying wearing Angéliques sous la Pluie again and again over the past few days. I know full-on summer is coming soon, though, and Angéliques sous la Pluie will get pushed back on the shelf until that special time of year when it again feels so right.