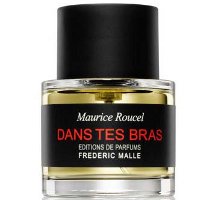 Dans Tes Bras is the latest from Frederic Malle. It's the brand's 17th fragrance (time flies!) and the second from perfumer Maurice Roucel (he also developed Musc Ravageur). Dans Tes Bras aims to capture the scent of warm, salty skin — Malle described it as "saltiness and a hint of sunscreen" and noted that the "...idea was to depict intimacy – when you travel through it, you get the scent of skin."*

Dans Tes Bras is, simply put, a strange fragrance. Search the online fragrance forums and you'll find lots of mushroom references; Perfume Posse described it as the "violets in the mushroom patch oddity that is Dans tes Bras" (but they meant that in a good way, mind you).

I'll start with the facts: Dans Tes Bras is a spicy woods scent, and the notes include bergamot, clove, violet, jasmine, sandalwood, patchouli, incense, cashmeran, heliotrope and white musk. The early stages are strong, peppery-earthy violet; later, it's softer and earthier still, and the violet gradually gives way to a very salty heliotrope over vague musky woods (it reportedly features an "overdose" of the cashmeran note). Several hours in, it comes very close to its inspiration: it smells like dirty skin — not sweaty, really, just dirty, that is, skin with dirt on it, and possibly with the remnants of the violet perfume you'd applied earlier in the day.

Is it nice? Well, that's going to depend very much on your definition of nice. It strikes me as perhaps the most intellectual fragrance of the Frederic Malle line, and I can't help but wonder what people (including me) would make of it without the brand name and the backstory. As an exercise in modern conceptual perfumery, it's an interesting fragrance, but even after wearing it numerous times over a period of some weeks, I find I can't really approach it on any other terms than as an exercise in modern conceptual perfumery. For now, it's going in my purgatory basket.