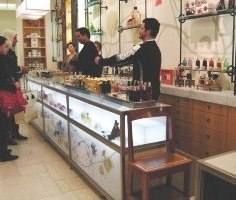 Since its expansion in the 1980s, when it transformed itself from a reliable menswear merchant into a trendsetter for both sexes, Barneys has been known for showcasing new designers as well as established pioneers of fashion. In the flagship store on Madison Avenue, the beauty department occupies the entire lower level, which is cleverly dubbed The Foundation. If you can pass the countless cosmetics counters without getting distracted, you will find the fragrance area stretched along one wall. The men’s and women’s scents are arranged together along a single counter, and that counter is staffed by a phalanx of assistants who will demonstrate the fragrances, letting you know which ones are newest to the line-up.

In keeping with the store’s innovative character, Barneys’ fragrance department specializes primarily in hard-to-find perfumes, from entire lines to single scents. A comprehensive selection of fragrances from Serge Lutens anchors one section of the counter, and an individual cult favorite such as 100% Love might be spotlighted in the display case. In addition to these experimental scents, you can also find more romantic offerings, such as historically based i Profumi di Firenze and the poetic Les Parfums de Rosine. At a slight distance from the fragrance counter, an “apothecary” area holds a few additional scents mixed amongst luxury toiletries and candles, so that you can keep your entire body and your home smelling wonderfully up-to-date.

Not to be missed: The in-house boutiques for Le Labo and Frédéric Malle Editions de Parfums. Both companies are known for their unconventional approaches to perfumery, and both have very limited distribution. This is Le Labo’s only New York location other than its Nolita shop, and it is Malle’s only New York location, not to mention the only store for which the company has created a custom fragrance (Frédéric Malle’s Outrageous!). 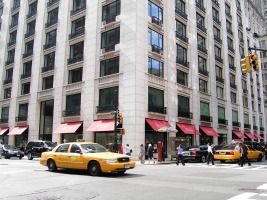 — report and images filed by Jessica.