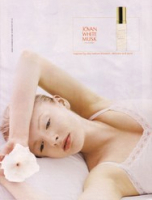 Jovan Musk for women has been a drugstore staple since it was introduced in 1972. Jovan's website lists its notes as jasmine, neroli, bergamot oils, and musk. Of the three musks, Musk for women is the lady. Musk for women is a slightly aldehydic, floral musk. The aldehydes fade fast, but the bergamot persists quietly as the musk ramps up, and I swear I smell a smidgen of lavender giving Musk for women's lushness a clean edge. The first time I wore Musk for women, I thought of the smell left after a hot shower with a floral soap. I smell kinship with Guerlain Vega, too, although I haven't tried them side by side.

Maybe encouraged by Musk for women's success, Jovan launched White Musk in 1990. The Jovan website lists White Musk's notes as jasmine, ylang ylang, honeysuckle, musk, "soft words", and amber. The result is a light, "teen" version of Musk for women, sharing Musk's gentle aldehydic lift and floral heart, but with more powder and honey than its older sister. As White Musk dries down, its musky base amplifies and the teen scent suddenly loses her interest in horses and Nancy Drew to cat around in midriff-exposing shirts at the mall. If I were to compare it to a niche fragrance, I'd choose Serge Lutens Clair de Musc. Like Musk for women, White Musk Eau de Cologne lasts three hours tops.

I took the musks to Montana Chad's in Billings, Montana for some two-stepping, and here Vanilla Musk was the winner, too. It felt just right in the company of cigarette smoke, cheap beer, and covers of songs like "Tequila Makes Her Take Her Clothes Off". The drugstore musks' fancier cousins will have to wait for symphony tickets. .