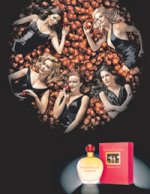 Forbidden Fruit is the debut scent from the television series Desperate Housewives, now in its third season on ABC. Created under arrangements with Coty, the Forbidden Fruit fragrance is a fruity floriental with notes of Rome apples, orange blossom, peach, wisteria (a nod to the show's fictional Wisteria Lane), jasmine, ylang-ylang, passion lily, cedarwood, sandalwood, vanilla and tonka bean.

Despite the name and the advertising, Forbidden Fruit is not quite as fruity as I expected. It starts with tart apple with a touch of citrus, then settles quickly into a woody-musky floral with only subtle hints of peach. It is nowhere near as va-va-voom as the ladies arranged over the apples might suggest, but the dry down does have a nice warmth, and it is not at all overly sweet — in fact, it smells like they might actually be targeting women over the age of 20.

Forbidden Fruit isn't a bad fragrance. It just doesn't have anything particulary distinctive or unusual about it, and given the current sea of fruity florals out there, it is hard to see how it is going to make a huge mark. On the other hand, Desperate Housewives apparently has over 20 million viewers: not a bad captive audience for a fragrance launch. Maybe it'll make a mint.

My vote for the next TV-inspired fragrance: something fronted by Hugh Laurie of House. Make it nice and dark. Oudh wood with a nice medicinal haze floating over it, maybe some incense? Oops, I guess that's 10 Corso Como.

Desperate Housewives Forbidden Fruit is available in 100 ml Eau de Parfum, and is exclusive to macys.