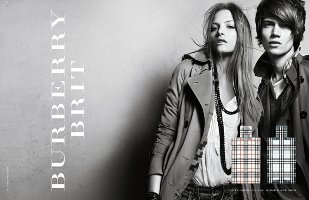 Clothing line established in the UK in 1856 by Thomas Burberry. Burberry invented gabardine fabric, and for many years the trench coat was the mainstay of the Burberry business:

The notoriously conservative manufacturer stuck primarily to its well-known raincoats until the 1960s, when a fluke led Burberry to capitalize on the garments’ trademark tan, black, red, and white plaid lining. It all started with a window display at the company’s Paris store. The shop’s manager spiced up her arrangement of trench coats by turning up the hem of one coat to show off its checked lining, then repeated the check on an array of umbrellas. The clamor for the umbrellas was so immediate and compelling that Burberry’s made and quickly sold hundreds.1

The rest, as they say, is history: today the famous Burberry check pattern adorns everything from umbrellas to cashmere scarves to dog leashes. In the meantime, creative director Christopher Bailey transformed Burberry into an upscale designer label. He left the company in 2018, after 17 years. He was replaced by designer Riccardo Tisci, formerly of Givenchy.

Burberry's fragrance business was licensed to Inter Parfums through 2012. In early 2013 the brand announced they would be developing fragrance in-house. In 2017, the license went to Coty.

The first fragrance, Burberry for men, debuted in 1981. Other well-known early scents include Weekend and Touch (2000). Burberry Brit, introduced in 2003, was a huge success, and was followed by Brit Red, Brit Gold, Brit for men and Brit Anniversary Edition.

2014: Burberry Brit Rhythm for Her, My Burberry

Burberry fragrances can be found at major department stores, or online at the various fragrance discounters.

See all articles on Now Smell This tagged Burberry, or take a look at our collection of Burberry fragrance commercials.

1. Via International Directory of Company Histories.