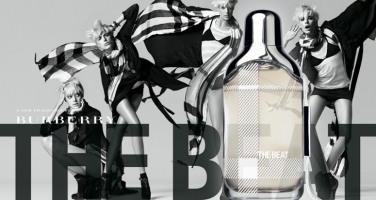 The Beat is the latest feminine perfume from Burberry, and in keeping with the iconic brand's ongoing efforts to stay trendy and of the moment, it is aimed (what else is new) at a young audience:

With model Agyness Deyn as its face, Beat is targeting a young, urban and hip crowd, said Burberry's creative director Christopher Bailey. "The mood of the fragrance is young, modern, energetic, dynamic, expressive, fun, vigour, verve and spiritedness ... All words that describe the mood, inspiration and sense of ebullience that we wanted to evoke." (via Cosmetics International, 12/14/2007)

The Beat is described as a sparkling floral woody fragrance; the notes feature bergamot, mandarin, Ceylon tea, cardamom, pink pepper, bluebell, iris, white musk, vetiver and cedarwood. It starts very bright, with tart fruit and juicy citrus. There is lots of pink pepper (can anybody remember what perfumes smelled like before pink pepper became obligatory?) and a teensy little pinch of cardamom. The heart is sheer bluebell-ish florals, still very bright; the base is cool and pale and summery, and smoothed over with a smidgen of iris. The ad copy calls The Beat "carnal, slightly wild", but that is the usual nonsense — there is nothing even vaguely carnal about it. It smells young and cheerful and clean, and is a pretty good match with the mood of the print ad.

There is also an "Elixir Parfum" version. It's a richer scent, with a heavier concentration of iris (you can smell the iris as soon as you spray it on) and a deeper, smokier tea note. The bluebell is there but less prominent, and the base, while still largely pale and cool, is warmer and earthier. It isn't carnal or wild either, but nor is it young and cheerful and clean.

I spent some time listening to the music that Burberry reportedly gave to perfumers Dominique Ropion, Olivier Polge and Beatrice Piquet to get them in the right mindset for The Beat (Kasabian, Dirty Pretty Things, Razorlight, the Arctic Monkeys and The Fratellis). It is par for the course, I suppose, that the music is far edgier than the juice they came up with? Presumably they're hoping to reach a wider audience than you'd get with a fragrance that evoked Dirty Pretty Things' Gin and Milk, and I shouldn't think anybody was going to go looking for edgy from Burberry anyway.

Instead, they've gone for likeable, and they've hit that right on the nail. The Eau de Parfum is youthful without loading on the strawberry candy (it doesn't smell like it's aimed at 'tweens), and while I wouldn't call it massively interesting, it's nicely done and a good fit with the Burberry aesthetic. I don't love it, but it didn't kill me to try it and I wouldn't mind smelling it all over town, in fact, I'd much rather smell The Beat all over town than any number of things. I found the Elixir Parfum considerably more tempting, in fact, it might be the first Burberry fragrance I've ever wanted to own. If you've been looking for a mainstream iris and found Prada's Infusion d'Iris too sheer and Bvlgari's Omnia Amethyste too pretty-charming, you might want to try The Beat Elixir.

You know that a brand capable of making beige plaid covetable is going to do decent packaging, and Burberry has come through on that score as well. The packaging is way cute. I like the Beat Eau de Parfum bottle (shown above), shaped like a hip flask and etched with a Burberry plaid design, just fine. It's easily as cute as the Burberry Brit bottle. The Elixir bottle (shown at right) is even more way cute; it's small enough to actually carry as a hip flask, and the plaid pattern is done in a metallic silver finish. I wanted one as soon as I saw it in person. I might just have to buy it.

The Beat by Burberry is available in 30, 50 ($62) or 75 ml ($80) Eau de Parfum or in 40 ml Elixir Parfum ($130); the body products include Shower Gel and Body Lotion. The Burberry boutique in my local mall had only the Eau de Parfum (and only in one size); Nordstrom had the entire range, including the Elixir. The Beat is expected to go into wider distribution over the next few months. I haven't seen the 30 ml bottle anywhere, and guessing that will be Sephora only?