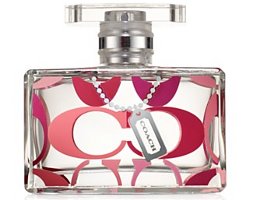 This week at lunch, a coworker and I took a walk to enjoy the first of Portland’s summer weather. “Do you mind stopping at Nordstrom?” I asked her. “I want to see if I can get samples of some summer flankers.”

Oh, how insular our little perfume loving world is. We even have our own jargon. I explained how fragrance companies sometimes release limited-edition summer versions of their most popular fragrances. Although I’ve fallen for a few flankers — Yves Saint Laurent Opium Fleur de Shanghai comes to mind — for the most part I don’t waste my time with them. Too many other fragrances beckon. But maybe I’d been missing out.

Coach Summer Edition 2012 has notes of water lily, mandarin, gardenia and magnolia. To me, it doesn’t smell distinctly of any of these notes. No juicy mandarin, voluptuous gardenia, or creamy-crisp magnolia sings clearly. Instead, a little pale orange and a whiny white floral note ride a tide of aldehydes, ozone, and a thin woody musk laced with laundry soap. Coach Summer Edition smells like a mall perfume cliché.

The Coach Summer Edition tester was just about empty, so clearly other people found merit in it. Still, I wanted to tape an arrow on the tester pointing toward the Annick Goutals a few feet away. Maybe the Goutals doesn’t get the same ad space, but I bet some of the Coach Summer Edition customers would be blown away — in a good way — by a spritz of Le Chèvrefeuille. Verdict on the Coach flanker? A big “pass.” 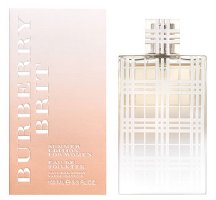 Below the Coach on the shelf was Burberry Brit Summer Edition 2012. Its notes include Japanese green tea accord, Italian lime, green almond, pear, sugared almond, white peony, white musk, amber, and the tantalizingly named “vibrating” mahogany wood. Burberry Brit Summer Edition’s lime carries the top of the fragrance. It’s a soft lime rather than the crisp lime of Guerlain Eau de Cologne Impériale, and it’s soon subsumed by sweet wood (thankfully non-vibrating) and clean musk. The pear and almond are almost impossible to pick out.

The cool-warm play of the fragrance’s clean lime and musk against the almost chewy amber and wood makes Burberry Brit Summer Edition interesting. It’s fresh without being too predictable, and it has definite personality. Frankly, though, for a lime-wood fix, I’d go with the drier Dana English Leather and save the extra money.

Last night, liberally sprayed with Coach Summer Edition and Burberry Brit Summer, I met a friend at a bar. “I’m testing two perfumes,” I said and proffered my forearms for a sniff.

“I can tell. I could smell you ten feet away. That one’s not so bad,” he said and pointed to the Burberry Brit arm. “But that one —“ he nodded at the Coach arm “— Well, I didn’t want to say anything.” There you have it.