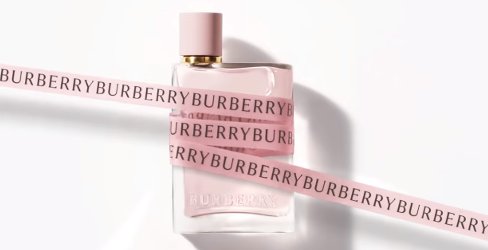 The background: Burberry's first pillar fragrance since the license moved from InterParfums to Coty, Burberry Her aims to evoke the youth, bustle, energy and creativity of London for women who are 'Londoners at heart'. It also appears to be aimed at increasing Burberry's share of the lucrative Asian market.

The juice: Burberry Her was developed by perfumer Francis Kurkdjian, who also did the last Burberry feminine pillar, 2014's My Burberry. Burberry Her is described as a fruity floral gourmand with raspberry, cherry, strawberry, blackberry, blueberry, violet, jasmine, woods, musk and amber. Kurkdjian says the "idea was to lighten it up, almost like whipped cream; to find the sweet note and make it dry and airy".1

The packaging: The bottle is meant to recall the brand's first fragrance, 1981's Burberrys for Men, but in blush pink.

The advertising: Cara Delevingne does the London tourist route while singing Hubert Gregg's Maybe It's Because I'm a Londoner.

What it smells like: Pretty much as promised. What you'll remember is the berries — the flowers are there if you go looking, but they don't stand out. Burberry Her is not an old-school fruity floral, though, or even an old-school gourmand. Here the berries are wrapped in an airy / guaze-y / clean amber-y musk, and so it wears like fruit salad only briefly before the sweetness is brought under control. The undertone is indeed dry, and at times there are flashes of bitterness. By 30 minutes in, it wears like a mild fruity musk, rather clean, lightly vanillic, with a pale dusting of powder. It does smell young, and it does smell blush pink.

My verdict: I called My Burberry "likable and easy to wear", and I'd say the same for Burberry Her, with the proviso that while I do find it likable enough, I, personally, would just as soon not wear it. Kurkdjian succeeded in lightening it up, but he perhaps went too far to please a perfumista. It isn't quite bland, and it doesn't vanish into the ether in short order, but there isn't much there that I found interesting or memorable.

If I wanted a no-brainer from Burberry, there's the much prettier (and more sophisticated) My Burberry, or even better, Burberry Brit Rhythm for Her, which I noted was "not too young or too pinkified or too silly", and which I've come to like even more since I reviewed it back in 2014. If that one was still around in a rollerball, I might bite.

1. From Coty launches Burberry Her fragrance into travel retail at Moodie Davitt Report.