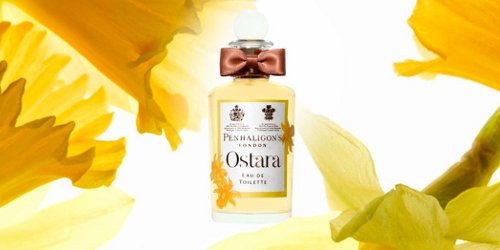 I have fallen woefully behind on Penhaligon’s — and on many other brands as well, but right now I'll focus on Penhaligon's. Someone do comment if any of the four fragrances in their Trade Routes collection (Empressa, Levantium, Lothair and As Sawira) are absolute-must-tries, otherwise, they will remain four more faceless (smell-less?) entities in the sea of niche releases. Who can keep up?

As I've said in the past, I'm a bit lukewarm about Penhaligon's anyway. They do a good job at what they do, but what they do, with one exception, doesn't especially suit me. The latest, Ostara,1 got my attention because a) it's narcissus, and b) the graphics are pretty (yes, I'm that shallow) and c) it's perfumer Bertrand Duchaufour, but a solar floral fragrance that promised to "capture the optimism and sunlight that spring brings" did not sound like his usual.

Ostara is meant to be "a modern interpretation" of the daffodil from "bulb to bud to bloom", and it works well as such a thing. The long list of notes (clementine, bergamot, red berries, juniper, spearmint, blackcurrant bud, violet leaf, leafy effects, aldehydes, hyacinth, narcissus, beeswax, cyclamen, ylang ylang, hawthorn, wisteria, styrax, vanilla, benzoin, musk, amber and white woods) perfectly illustrates why long lists of notes are not always more helpful than short lists of notes: Ostara is basically a daffodil / narcissus soliflore.2

The opening is sunny and citrus-y, and within seconds the notes reorganize themselves to reasonably render the idea of daffodils, freshly picked, with the dew still on the petals. If you close your eyes and focus, you might pick out some of the notes in the list (for a few brief seconds, it could almost be a hyacinth soliflore) but it really works better if you don't. If you close your eyes and don't focus, it's a sea of muted gold warmed by the sun and touched by a light breeze, with pale green accents and a light hint of floral spice.

The dry down, as you'd expect, is a bit more diffuse. It's softer and a bit creamier, less radiant, less springlike. It stays in pastel colors, now more buttery-yellow than gold, and there's a little hum of earthiness under the woods and balsams. And here is where I start quibbling. You know that lovely thing that happens when you wear a fantastic perfume, and every once in awhile you forget what you're wearing for a second and wonder where that gorgeous smell is coming from? With Ostara, I'd forget what I was wearing and wonder why I was catching a whiff of laundry detergent.

Mind you, it's not that clean, not when you're paying attention. But there's a definite undertone of clean. Sometimes it seemed more assertive and sometimes less, but I found it disconcerting.

Verdict: Ostara is gorgeous; if you don't mind clean notes as much as I do (and most people don't) you might adore it, and anyone who loves spring florals ought to at least give it a try. I gave it more trials than usual, and a few times it almost made my buy list. If I was still buying decants, it would be on that list.

Penhaligon's Ostara is available in 50 ($120) and 100 ($150) ml Eau de Toilette. For buying information, see the listing for Penhaligon’s under Perfume Houses.

1. Ostara is the namesake goddess of Easter; see more at Wikipedia.

2. "The illusion of daffodils is completed with a floral bouquet: ylang ylang is present to add yellow, cyclamen brings the suggestion of morning dew, hyacinth for green freshness, wisteria as another narcotic spring flower, and hawthorn for its hedgerow effect." Read more at Ostara: A Master's Secrets at Penhaligon's. And see also: Never At Sephora - Bertrand Duchaufour At The Launch Of Penhaligon's Ostara at Persolaise.